The Michelin guide for the Nordic countries on Monday released its ratings for 2021, and in addition to confirming the three-star rating of Stockholm’s Frantzén restaurant, it also handed out new stars to four Swedish restaurants – and not just in the capital.

According to the Michelin Guide: “In a delightful harbour setting sits this striking restaurant offering great space and comfort. Opened in 2020, it’s an ideal spot for escaping city life. Guests walk through the open kitchen to get to the tables where they’re greeted by a charming service team. The beautiful dishes boast the occasional Asian note and make the superb ingredients really shine.”

According to the Michelin Guide: “Three siblings – third generation dairy farmers – have created a delightful destination restaurants complete with a vineyard, hotel and spa. The no-waste surprise tasting menu uses fantastic seasonal produce from the surrounding Halland region and the resulting skilfully prepared dishes are delicate, balanced and full of flavour. Gracious service adds to the experience.”

According to the Michelin Guide: “This cosy restaurant is personally run by a husband and wife team, whose balanced, seasonal tasting menu offers dishes which are refined, original and full of flavour. The eloquent team proudly explain the components of each dish with a smile; from the delicious bread which takes five days to make to the homemade butter which takes two.”

According to the Michelin Guide: “The team at this historic hotel’s restaurant provide a warm welcome and its wine list is a treasure trove. Tasting menus showcase seasonal ingredients from the beautiful island of Öland; much of it from their own delightful garden, and the elaborate dishes boast flavours and original combinations.”

Semlor are traditionally eaten on Shrove Tuesday or Fettisdagen, as the last festive food before Lent, a traditional fasting period leading up to Easter. Fettisdagen falls on March 1st this year, so you still have a week or so left to find your favourite semla before the big day.

They are known as fastlagsbullar in southern Sweden, and – despite their origins – are now commonly available in bakeries from the end of the Christmas season to the start of Easter, rather than just on Shrove Tuesday.

A good semla is no more than the sum of its parts – the holy trinity of cardamom bun, whipped cream and almond paste. The ideal semla will take all of these individual parts into account, with each bite a perfect mix of cream, bun, and almond.

We asked semla-lovers on Twitter and in Malmö foodie group Malmöfoodisar on Facebook to tell us what you should look for in the ideal semla – here’s what they said. 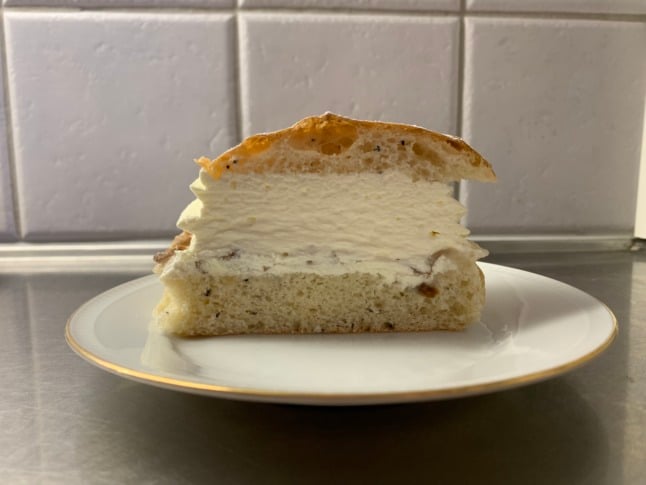 A semla cross-section. There’s a layer of almond paste hiding somewhere under all that cream. Photo: Becky Waterton/The Local

The bun: ‘Absolutely not too dry’

Most of the people who got in touch were in agreement – a semla bun needs to have a noticeable cardamom flavour, without taking over. Rhiannon on Twitter said that “roughly ground cardamom in the bread” was important, with “a nice dusting of icing sugar on top of the bun”.

Joakim on Facebook said that, in his opinion the bun should be a “rather soft wheat bun with a light cardamom touch (the cardamom shouldn’t take over)”.

Charlotta, from the same Facebook group, said that the bun should be “fluffy with a noticeable cardamom flavour”, stating that she also enjoys “more historical semlor you can find further north where the inside of the bun is partly removed and mixed with the almond paste”.

Linnéa said on Facebook that the bun should be “soft and smooth, and absolutely not too dry”. 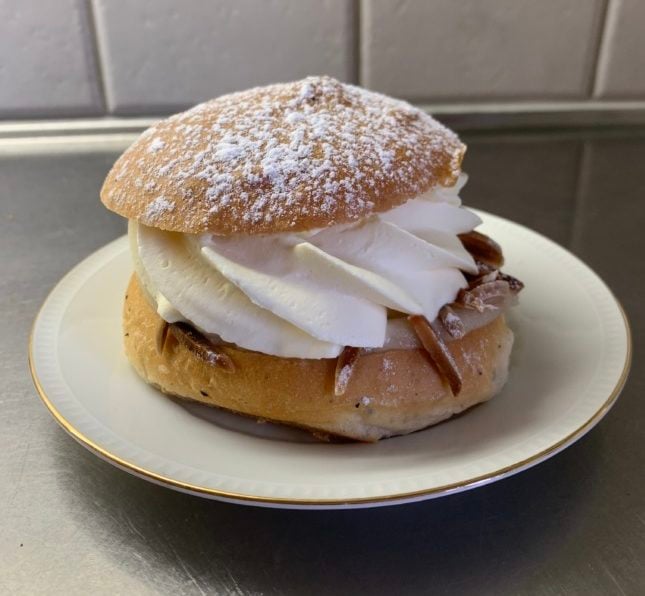 A semla from St. Jakobs bakery in Malmö. Nice crunchy almond paste and a good sized lid. Too much cream for me so my husband got the other half. Photo: Becky Waterton/The Local

Semla cream should be “high quality whipped cream”, Rhiannon told us on Twitter, although on Facebook, people were split as to whether cream should include vanilla or not. My prefers her semlor to have “whipped cream with a bit of vanilla”, whereas Maria said that there should be “no jävla vanilla!” using a Swedish expletive that can be best translated into English as “bloody” or “damn”.

Cecilia said that there should be “enough fluffy cream so there’s a bit in every bite”, and Charlotta told us that the cream should be “quite lightly whipped (hand-whipped, if possible), absolutely not sweetened”.

Linnéa told us that her ideal semla had “lots of cream (vegan if possible)” – although semlor can be heavy on the dairy, vegans can also enjoy the Lenten treat if the cream is oat- or soya-based.

People of Sweden! Shrove Tuesday (AKA Semla day) is coming up on March 1st. Tell me about your ideal semla: how much cream should there be, what should the bun taste like – I want details! Asking for a @TheLocalSweden article, so let me know if you want to remain anonymous.

Some vegan semlor can be as good as – or even better than – normal cream-based semlor, which dairy company Arla awkwardly found out when a vegan semla was voted into first place in their semla competition last year. Unfortunately for the bakery in question, Arla ended up cancelling the competition, which the company’s press officer told newspaper Dagens Nyheter was due to a “lack of engagement from bakers around the country”.

The company told the newspaper that, instead of handing out a prize, they would “buy one hundred semla from each of the top one hundred entries” and donate them to care homes – with one caveat: “we’re only going to buy semlor made with cream and butter”. 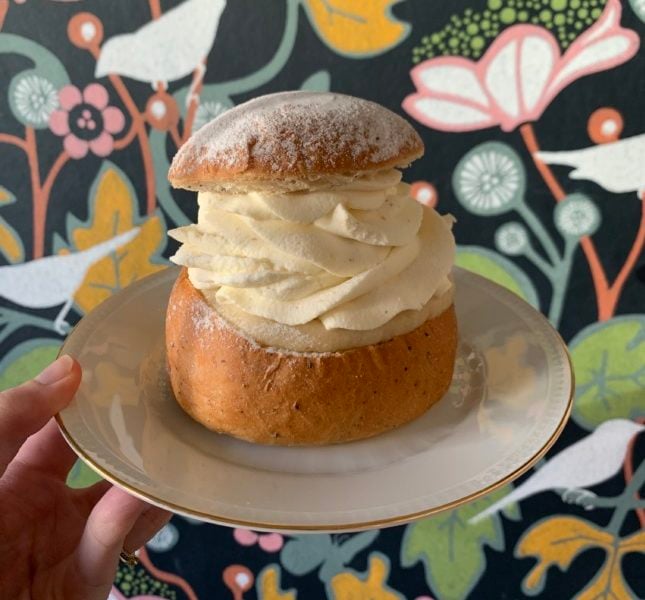 Definitely a semla for cream lovers! From Hedh Escalante in Malmö. This one was bought reduced at the end of the day but was still delicious. Photo: Becky Waterton/The Local

The almond paste: ‘Chunky in texture’

The third component of a semla, the almond paste or mandelmassa can fall into two categories: smooth or chunky with pieces of almond. Rhiannon and Sebastian on Twitter both said that they preferred their almond paste “chunky”, with Sebastian saying that mandelmassa that is too smooth is a no-go, as “you’ll just be reminded of cheap peanut butter”.

Cecilia prefers a semla with “a generous amount of almond paste made from well-roasted almonds so that the paste is dark brown, with bits of almond in”.

Joakim likes a “nice soft almond paste” in his semla, saying that “it shouldn’t be a hard lump”, whereas Maria prefers “soft and chewy” almond paste in hers.

Renee said that a semla offering “something other than mandelmassa” is appreciated by those with a nut allergy, adding that her partner “insists on putting in Calvados for the mandelmassa eaters” which, although not traditional is “the real trick”. 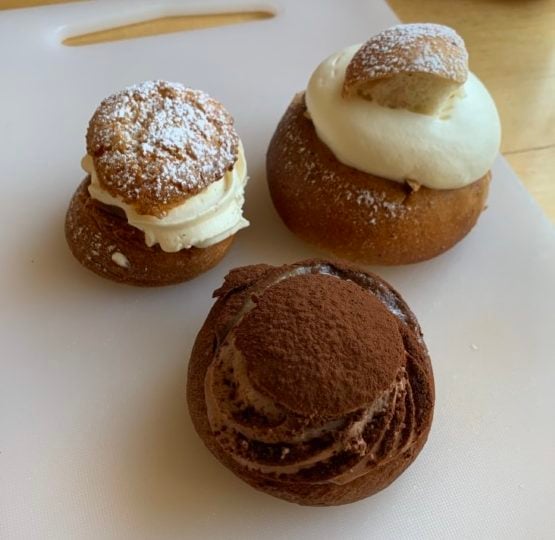 Mikael prefers a lid he can use as a spoon to “scoop up the cream”, which he says rules out the “wimpy little triangular lids” many bakers go for. He also said that a small triangular lid can give a semla the “wrong balance”, leaving it “with too much bun on the bottom”.

Maria said that “it’s not necessary to cut the lid into a triangle”, and that there should be “lagom icing sugar on top”. Lagom, in case you didn’t know, is the Swedish term for “just enough”.

Cecilia likes the lid of her semla to be well dusted with icing sugar, saying that is should be “really sweet”.

Milk or no milk?

Some old-school semla eaters may be intrigued by the concept of hetvägg – a semla served in a bowl of warm milk. Thomas told us that he prefers his semla to have a “high mandelmassa to cream ratio”, served “with warm milk”.

Sebastian, on the other hand, was not a fan, telling us “for God’s sake, skip the milk thing. It’s vile”.

Charlotte said that hetvägg is good if you have “a dry semla or haven’t managed to eat it in time”, describing it as “like a bread and butter pudding using up something which has gone stale”. 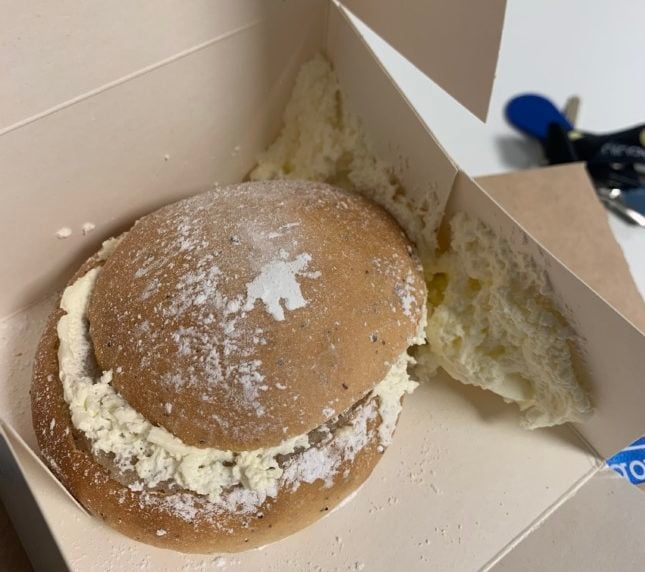 No semlor were harmed in the making of this article. Except this one from Gateau, which I accidentally dropped. Photo: Becky Waterton/The Local

‘Try to eat as many as you can’

Sofi on Twitter’s best semla tip was “if it’s your first ever semla, have a home-baked one or one you get from a really good bakery. The ones you get from a supermarket may remind you of the good stuff, but if this is where you start, you’ll never learn to enjoy it”.

John on Facebook had extremely good advice: he said that you should “try to eat as many as you can. Then eventually you’ll find the one you like the best.”

Joakim said that “most important of all is that the semla is eaten very shortly after it is made”, stating that “a semla which has been stored in a fridge has already suffered the biggest sin, with the question of whether it can even be called a semla any more”.

If this article hasn’t given you enough semla tips for this semla season, our commenters also gave us their tips for the best semla influencers who have taken upon themselves the noble task of testing semlor so you don’t have to.

Unfortunately, we did not get any tips for semla influencers in Stockholm – let us know if you know of someone we’ve missed!

Finally, Malmö foodie group Malmöfoodisar gave us their semla tips for this article – have a look at their sister groups for Stockholm and Gothenburg if you’re looking for the best Swedish foodie tips in other cities!

STOCKHOLM
10 hacks that make life in Stockholm much easier