Non-residents vaccinated against Covid-19 in Denmark are issued with a paper certificate without the QR code which connects it to the EU's digital pass. File photo: Olivier MORIN / AFP

People who are vaccinated during temporary stays in Denmark are issued paper vaccination certificates without the QR codes that automatically link them to the EU’s Digital Covid Certificate.

The issue affects people without a personal registration (CPR) number, who are thereby unable to access the Danish Coronapas app or health platform sundhed.dk. That could include people staying in the country for limited periods, for example to visit loved ones.

Regional health authorities offer vaccination to people in Denmark on short term stays without registration of residency, if they have a foreign address but health insurance in Denmark; or if they reside temporarily in Denmark and don’t have insurance. Instructions for how to access vaccination can be found on the regional authorities’ websites, like this one for South Denmark.

In the absence of a digital login to the Danish health system, people vaccinated while in the country temporarily are instead given a paper vaccination certificate. But the certificate does not include the QR code compatible with the EU system, which not only allows for smooth travel within the EU but also allows entry to bars and restaurants and cultural sites in the many countries that have extended the use of their Covid health passes.

“I am not a resident of Denmark, but stayed with my husband (who is a resident) in the country for nearly three months over the summer during which time I received both vaccines. I’m now not able to get proof of this that is linked with a QR code to vaccination records,” Laura, a reader of The Local, said.

“I need this document to travel, to visit family, and for work. I feel trapped even though I have taken all the required precautions to keep myself and others safe,” she said.

Sundhed.dk is the public health information platform at which vaccination certificates can normally be accessed and downloaded, along with the Coronapas app. To do so, it is necessary to log in using identification issued to anyone with legal residence in Denmark.

“To be able to see a Coronapas at Sundhed.dk you must have a Nem-ID [secure digital identity issued to Danish residents, ed.] and that’s not the case here,” Sundhed.dk told The Local via email in reference to documentation for people vaccinated during temporary stays for which no residence permit was needed.

“We refer foreigners who need documentation to the place where they were vaccinated,” they confirmed.

READ ALSO: Applying for residency in Denmark: Why you might need health insurance during processing period

Three of Denmark’s five healthcare administrations – Zealand, Central Jutland and North Jutland – told The Local that their centres do not issue a QR code on the paper vaccination certificates given to people vaccinated whilst on a visit to the country.

“All residents in the EU and Schengen countries can be issued a European coronapas (the EU’s digital Covid certificate) that documents that they have been vaccinated,” Region Zealand’s senior medical advisor for vaccination and head of department Søren W. Rasmussen said in a written comment.

“If a foreigner was vaccinated in Denmark while that person was on a temporary stay here, but does not have a CPR number, that person should have a vaccination certificate issued at the place of vaccination.

That card does not include a QR code to automatically connect it with the European system, however.

A press officer for Region North Jutland told The Local that adding QR codes to the paper certificates “has been discussed, but so far the task has not been prioritised ahead of others which also need attending to”.

Another region, South Denmark, noted that the vaccination certificates were a “national solution” and therefore not developed regionally, but by the Danish Health Data Authority (Sundhedsdatastyrelsen).

In an email, the Danish Health Data Authority told The Local it was working to address the issue but currently had no timescale for its resolution.

“We aware are of the issue and are therefore investigating when we will have a solution ready,” the agency said, adding that it did not have a set date for this at the time of writing.

Although some EU countries accept paper vaccination certificates without a QR code – notably for people travelling from the United States – it is unclear whether documentation issued in the EU, but without a code will be uniformly accepted at borders.

Even if a vaccination certificate without a QR code is accepted by EU countries at borders, not having the code could cause issues elsewhere. Many European countries have restrictions in place – similar to Denmark’s recently-lifted coronapas rules – requiring the health pass to be presented to access restaurants, bars, museums or other public places.

The EU states that its Digital Covid Certificate “takes the form of a QR code, which can be electronic (on your smartphone or tablet, for instance) or printed and scanned when travelling.”

The certificate – with QR code – is “valid in all EU countries”, the union states.

Some countries, such as France, meanwhile allow you to upload your paper certificate and get it exchanged for a QR code, which can then be accessed on France’s version of the EU digital pass.

However, the French government website which facilitates this is designed for non-EU travellers such as American tourists, rather than people vaccinated within the EU. It also requires you to have booked travel to France (or be in France).

People in Italy aged 18 and over are now eligible to get vaccinated against Covid-19 with ‘Nuvaxovid’ – the name of the new Covid vaccine from the company Novavax.

Around one million doses are initially due to arrive in Italy by the end of February, according to Italian media reports.

Some 100 million initial doses in total have been shipped to Italy and other EU countries from the company’s Dutch distribution centre, the US medical company announced in a statement.

It’s hoped that Novavax could offer a more attractive alternative for previously unvaccinated people who are sceptical about the mRNA and vector vaccines.

“It’s a protein vaccine, like the flu vaccines,” said Italian medicines agency director Nicola Magrini earlier in February. “It will be a small supplement compared to the other mRna vaccines. Some seem to prefer it.”

READ ALSO: When and how will Italy offer a fourth Covid-19 vaccine dose?

The Marche region and Lombardy, for example, have started accepting vaccine bookings for the new inoculation, while Emilia Romagna is set to offer vaccine hubs with the new jab.

Each regional healthcare system can decide how it will administer the shot, so people looking to book their dose will need to check their region of residence’s guidelines. Find links here.

On a national level, Italy’s Ministry of Health has published a circular with instructions on the vaccine’s use ahead of its delivery.

Novavax, whose trade name is ‘Nuvaxovid’, has so far only been approved for the primary cycle. The first and second doses are given three weeks apart, while approval is pending for the third dose.

READ ALSO: How to try to get a Covid-19 vaccine without a health card in your region of Italy 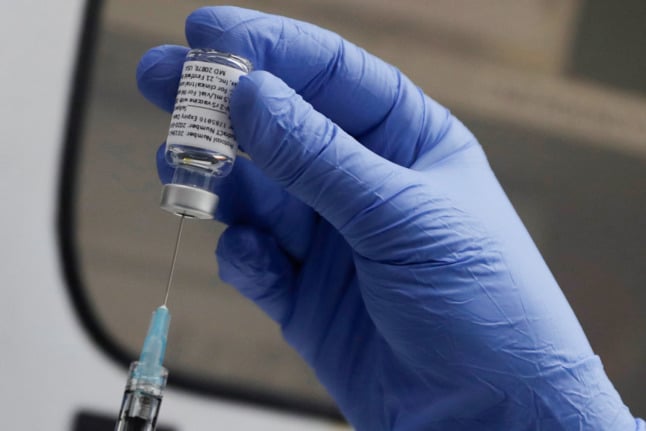 Nuvaxovid is a so-called protein vaccine which contains coronavirus-like particles that stimulate the immune system to produce defence antibodies and T-cells against SARS-CoV-2 – that is, white blood cells specialised to fight the virus to protect against Covid-19.

The ministry’s circular states that, “the duration of protection offered by the vaccine is not known, as it is still being determined in ongoing clinical trials”.

“None of the components of this vaccine can cause Covid-19,” the circular reads.

READ ALSO: Reader question: Do I need to update my Italian green pass after a booster shot?

“Protection may not be complete until seven days after administration of the second dose. As with all vaccines, vaccination with Nuvaxovid may not protect all vaccinees,” it added.

Its efficacy, calculated during the trials, is 90 percent in preventing symptomatic disease, slightly lower than for the RNA vaccines, which reached 95 percent.

Tests were carried out before the arrival of the Omicron variant, however. It is possible that the protection of Novavax has dropped a little since then.