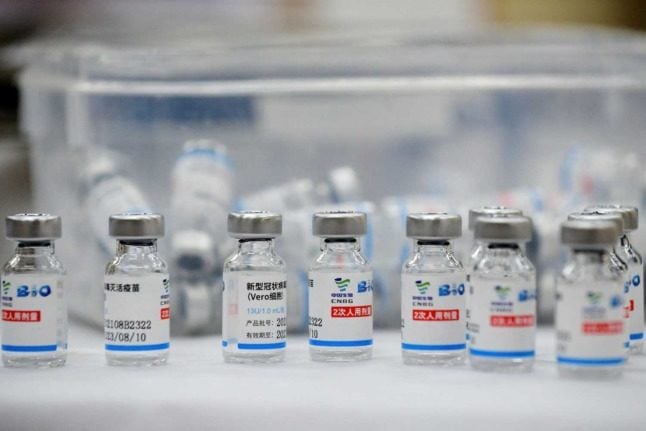 Empty vials of the Sinopharm Covid-19 coronavirus vaccine are kept on a table at a vaccination centre. Switzerland will now accept Chinese vaccines for entry and the Covid certificate. Photo: Nhac NGUYEN / AFP

The Swiss government has again updated its Covid certificate policy.

Now, proof of vaccination with the jabs from China’s Sinopharm and Sinovac vaccines will now be accepted for the Covid certificate framework.

This is the latest expansion of the types of vaccines which are accepted.

Which vaccines have been accepted by Switzerland for the Covid certificate and how has this changed over time?

See the following link for which vaccines are accepted for entry to Switzerland.

UPDATE: Which vaccines are accepted for entry into Switzerland?

Initially, only vaccines approved by Swissmedic, the official domestic authority, were accepted for the Covid certificate.

This meant that Moderna, Biontech/Pfizer and Johnson and Johnson were the only ones accepted.

Note that up until late September, Johnson and Johnson was approved in Switzerland but was not administered domestically.

From September 20th, Switzerland expanded the accepted vaccines to include those approved by the EMA, which included AstraZeneca.

This made it much easier for people vaccinated in the United Kingdom, Israel, India and several other countries to get a Covid certificate, given the prevalence of AstraZeneca in these countries.

In an update on September 30th – and with comparatively little fanfare compared to the AstraZeneca change – the Swiss government said it would also allow vaccines on the WHO Emergency Use list.

At this time, that includes SARS-CoV-2 vaccine (Vero Cell) (Sinopharm/BIBP) and CoronaVac (Sinovac).

To the frustration of Russian travellers or those vaccinated in Russia, the Swiss government also stated that “COVID certificates cannot currently be issued for vaccination with Sputnik V.”