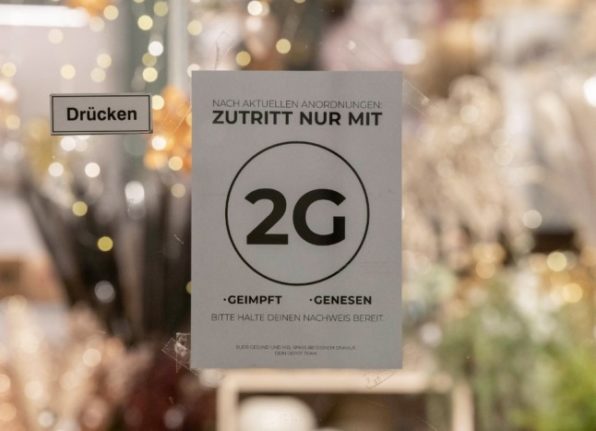 Could Switzerland adopt the same system as Germany (pictured here) and Austria in making the 2G rule obligatory? Photo by THOMAS KIENZLE / AFP

In a press conference on Friday, Health Minister Alain Berset said that the 2G rule – which refers to people who have been vaccinated and recovered, but not tested – will not be put in place on a federal level.

Berset, who announced a tightening of the Covid certificate whereby antigen tests would have a shorter validity, said it was up to the cantons and to private establishments to put in place a ‘2G’ restriction.

By doing so, these venues could then dispense with mask rules.

This means, in effect, that people who obtain the Covid certificate after a negative test would no longer be admitted to many bars, restaurants, and other venues.

Whether or not this measure will be enforced and to what extent is now being debated by health experts and politicians.

For Swiss president Guy Parmelin, the 2G “is conceivable” as a way to keep the healthcare system from being overcrowded with coronavirus patients, he said in an interview with public broadcaster SRF.

“If we do not want to make vaccination compulsory, all that remains are measures such as the generalisation of the 2G rule”, he noted.

But health officials like Lukas Engelberger, head of the Conference of Cantonal Health Directors, pointed out that if the current epidemiological situation can’t be brought under control, the 2G rule will not be enough to contain the pandemic.

Further measures, including the introduction of capacity limits, will have to be enforced.

“From an epidemiological point of view, the 2G certificate makes sense, especially when combined with an intensive campaign of tests, vaccinations and booster vaccinations”, according to Richard Neher, a biologist at the University of Basel.

Elected officials are also speaking in favour of the ‘vaccinated and recovered only’ strategy.

“I have come to the point where I have to say: you have to seriously consider 2G in certain areas of life”, said MP Matthias Jauslin.

He added, however, that “only a higher vaccination rate can get us out of the pandemic. The 2G rule could be a measure to achieve this goal”.

“I would like to encourage unvaccinated people to do something for our society and our health system”.

Cedric Wermuth, co-director of the Social Democratic party is also calling  “for a rapid open debate on measures such as the 2G rule or compulsory vaccination”.

After 20 months of the pandemic, nothing can no longer be excluded, he added.

Compulsory vaccination is a hot-button topic right now as well, especially amid reports about the skyrocketing number of infections and worsening situation in the country’s ICUs.

But is this enforceable in Switzerland?

For Parmelin, there is no question of making vaccination compulsory at present. “We’ve always said we don’t want it”, he said.

Christoph Berger, head of  the Federal Commission for Vaccinations, agreed.

“In Switzerland, to be vaccinated or not is a personal decision. A general vaccination obligation would violate this principle”.

For the commission, compulsory vaccination can only be taken into consideration when all other measures, including confinement, have proved ineffective, he pointed out.

For his part, Engelberger noted that this obligation will not significantly increase the vaccination rate.

“To impose compulsory vaccination, Switzerland would have to use such harsh methods that the relationship between citizens and the state would be seriously damaged in the long term”, he said.