The economy of the Valencian town of Jijona is based largely on turrón production. Photo: Dani Pozo/AFP

Turrón is a nougaty sweet treat made from eggs, sugar, honey and toasted nuts. Almonds are traditionally used, but there are other types sometimes used too, like pistachios. To make turrón, you heat honey until it begins to caramelize, then add the sugar and egg whites. The next step is to add the toasted nuts to the mixture and blend it all together before leaving it to rest and set. It can be kept for up to a year if it is stored properly.

What are the different types of turrón?

While there are lots of different flavoured turrónes available today, in reality there are only two types of turrón. Hard nougat (turrón duro) is known as Alicante nougat and soft nougat (turrón blando) as nearby Jijona nougat because they were originally made in those locations in Spain’s Valencia region.

What have the Moors ever done for us?

We owe the origin of nougat to the Arabs. Not only did the Islamic Empire leave its mark architecturally and linguistically, but nougat consumption in Spain is believed to have been around since the beginning of the 11th century. The Arabs called it turum and it was a common dessert that today’s recipe remains quite faithful to. The Moors brought the treat to Europe where it became popular in France, Italy, and most of all, Spain.

In fact, the first nougat recipe appears in a cookbook from the beginning of the 16th century in a “Women’s Manual” kept in the Palatine Library of Parma and the recipe is included in an encyclopedia of the tasks that the high-ranking ladies had to do at home back then.

Despite Alicante and Jijona’s fame, there are many regions in Spain where nougat is made. Soria is a province with a lot of nougat tradition, having a truly delicious variety of Soriano butter, and another very famous variety is guirlache or guirlache nougat, which without being turrón in the strictest sense, is associated with turrón and is very typical of Aragon and southern Catalonia. They are also traditionally consumed around Christmas time.

There’s also a salty nougat: a delicious snack that is challenging tradition. The idea was thought up by a Michelin-starred chef in…. you guessed it, Alicante.

Turrón that breaks the bank

The festive tradition of turrón is believed to be connected to the high cost that it has always had, which is why it is saved for special occasions. Turrón can be expensive – the ‘most expensive Turrón in the world’ is believed to be from Jijona and sets you back €250 for a half kilo!

For the G&T lovers out there, there is nougat gin! Created in 2017, its name nods to the Arab origin of nougat: Turum. The dessert of kings

The Spanish Royal Family is reputed to have always had a sweet tooth and a soft spot for turrón. In fact, the first place where nougat was consumed was at the Royal Court, and it has been a dessert of royalty since the time of Charles V.

The economy of the Valencian town of Jijona is centred around turrón production. There’s even a turrón museum that chronicles the process and history of the sweet located within the factory that makes both the famous “El Lobo” and “1880” brands of turrón. 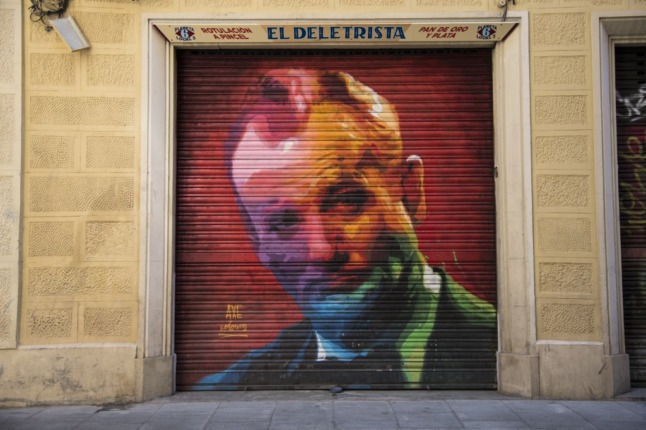 A graffiti of Bill Murray in Barcelona. What would the star of Groundhog Day make of these things that never change about life in Spain? Photo: Josep LAGO / AFP

Of course, many things in Spain have changed over the last few decades. Spaniards are no longer as religious, traditional gender roles aren’t as prevalent, they have become very open-minded regarding certain issues such as LGBTQ rights, and there has been a big jump in wealth and development since the days of Franco’s dictatorship.

But, there is still a lot that remains the same. Here are just a few things that never change in Spain.

It still takes a long time to get anything official done

Unfortunately, while many processes have moved online in recent years and certain things have become easier to do, it still takes a long time to get anything official done in Spain and there is still a lot of red tape.

For example, getting a ‘cita previa’ for anything from residency cards to driving licenses and padrón certificates can take months. In cities such as Barcelona it has become so difficult to get a prior appointment for processes such as these, that companies are now selling appointments instead. But it’s not just official documents that take a long time, it’s likely in Spain that you’ll also have to wait months for other things such as planning permission for your property or years to get your foreign qualifications verified.

READ ALSO: Do I need planning permission in Spain and how do I apply for it?

High unemployment and job insecurity have always been a big issue in Spain and continue to be so. In 1980, the unemployment rate was 12.4 percent, in 1990 it was 11.8 percent.  The latest Spanish government stats for 2021 show that Spain continues to be the EU country with the highest youth unemployment rate at 37.1 percent – ahead of Greece and Italy.

Statistics from November 2021 also show that Spain has the highest unemployment rate overall out of other European countries at 14.1 percent. This, along with a lot of short-term and temporary job contracts leads to a level of job insecurity in Spain.

Family ties have long been extremely important to Spaniards. Many Spanish people choose to live relatively close to their families, meaning that they spend a lot of time together. It’s not uncommon for extended Spanish families to get together for meals at weekends, go on holidays together, or even for grandparents to provide childcare while the parents are working.

One reason that Spanish families are so close could be the fact that Spaniards often still live with their parents well into their 30s. According to Eurostat data, Spain is the sixth country in Europe with more young people between 25 and 34 years old still living with their parents. The average age of emancipation in Spain is 29.5, compared to 26.2 years on average in the rest of Europe.

While there are obvious exceptions, it is generally considered that Spaniards don’t speak very good English, compared with their European counterparts. A report in 2020 by the foreign language company Education First, for example, which judged proficiency in English, placed Spaniards at the bottom of the table compared to the rest of the EU.

Unlike other countries, the number of Spaniards who can speak English has hardly changed in the last 10 years. Spaniards aged between 25 and 34 have been left far behind their peers in Portugal, Greece and Italy, which had similarly low rates of English speakers 10 years ago.

This means that while you may be able to get away with not knowing much Spanish if you do things that tourists do such as ordering in a restaurant, when it comes to more complicated things such as visiting the doctor or dealing with officials, your language skills had better be up to scratch.

August traditionally has been the month when everything closes down in Spain and everyone goes on holiday, and this is still true today. Don’t even think about trying to get anything official done in August or get any work done on your house, because it will be impossible. Even in major cities such as Madrid and Barcelona, many businesses and offices will close completely throughout August.

There’s no point fighting against it, just embrace the August spirit and join the Spanish at the beach. Let’s face it, in most of Spain, it’s really too hot to do anything else.

While separatist movements in Spain have both waned and gained in popularity over the last few decades, it’s true that these sentiments remain in particular regions of Spain. This is most notable in Catalonia and the Basque Country. While the Basque separatist group ETA finally dissolved in 2018 and the latest survey from 2021 shows that support for independence falls to historical lows at 21 percent, there are still many Basques who have separatist sentiments.

In Catalonia on the other hand, the latest survey from last year shows that just under half (48.7 percent) don’t want independence, meaning that there is still a strong movement for it.

The economy is still largely service-based

Spain’s economy is largely based on services such as tourism, hospitality and retail, and is still way behind other EU countries such as France and Germany when it comes to diversifying.

The tourism industry really kicked off in the 1960s and by the turn of the century the 40 million international visitors the country received annually meant it was already more important to the Spanish economy than the waining manufacturing industry. In 1975, industrial production represented 30 percent of Spain’s GDP, nowadays it’s 16 percent.

Official statistics show that during the last 10 years, over 60 percent of Spain’s GDP came from services, while around 20 percent was from industry and only around 2-3 percent from agriculture.

Spain still loves its crazy festivals and traditions which began decades or centuries ago, no matter how silly, absurd or dangerous they might be. In Catalonia, pitchfork-wielding devils still spray fire through the streets, in La Rioja they soak each other with wine, in Burgos people jump over babies and in Valencia, they set fire to large paper mâché sculptures. Yes, festivals are just as popular as ever in Spain and traditions remain strong, with the younger generations always getting involved.

Unfortunately, one of these crazy traditions is bullfighting, which sadly remains popular across much of the country. While the sport was abolished in Catalonia in 2012, it is still a strong tradition in places such as Andalusia and Navarra. According to official government figures, however, the annual rate of attendance at bullfights declines more and more every year, especially among young Spaniards. In 2018 the number of bullfighting events held in the country fell to a historic low of 1,521.

While Spain does get its fair share of storms, flash flooding and even snow, most of Spain generally enjoys good weather. Winters can be cold, but are generally sunny with blue skies, and in the summer, you can almost guarantee that the weather will be good enough to go to the beach for at least a couple of months. According to Spain’s meteorological agency AEMET, the country enjoys around 3,000 hours of sunshine per year. In most of Spain, the summer months are the hottest and driest. Daytime temperatures, particularly in July and August can often reach over 30°C.

There are some exceptions, particularly in the northern regions, such as Galicia, where the average summer temperatures are around 22-23°C.

In fact, a 2019 study by Spanish TV channel Antena 3, showed that Spaniards spend an average of €800 per year on eating out and that the Spanish go out to eat a lot more than in other Western European countries, but spend a lot less than nearby European countries such as France and Germany.