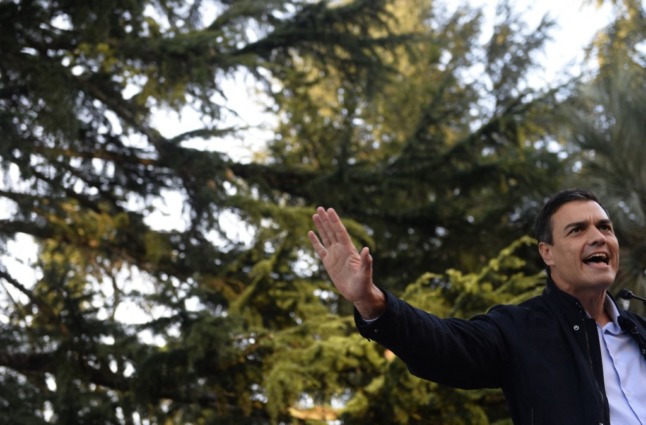 For many, the regional elections will be seen as not only a referendum on Casado’s leadership, but a midterm style judgement on the Pedro Sánchez led PSOE government at the national level. Photo: Miguel Riopa/AFP

If you’ve watched television in Spain recently, or picked up a newspaper, or had a look around Spanish Twitter, you’ll have noticed that Spain’s top politicians have been spending a lot of time campaigning in the countryside.

Leaders from all the major parties have descended on rural Castilla y León to support their regional parties in what many view as a potentially consequential election that could have ripple effects across the country.

Whether it be Prime Minister Pedro Sánchez in his bomber jacket, or Santiago Abascal putting on his wellies and doing his best ‘man of the people’ impersonation, Spain’s main political players have descended on the little-known mountainous region of Castilla y León in north-west Spain.

But neither of them are up for election, nor are Pablo Casado or any other national politician.

In fact, they have been on the campaign trail for regional elections. Why are they going to such efforts?

Castilla y León has traditionally been a PP stronghold. However the last set of regional elections there – in May 2019 – was actually won by PSOE on the popular vote, their first time taking the highest number of votes since 1983. However, PP quickly formed a coalition with Ciudadanos and got their leader, Alfonso Fernández Mañueco, installed as regional president.

In early-2021 opposition party PSOE tabled a vote of no confidence that was eventually defeated, but the political fallout saw a Ciudadanos member defect to the opposition, thrusting the PP led government into minority status. The coalition between PP and Ciudadanos had become strained, particularly over COVID-19 measures, and rumours began to swirl that Mañueco would call a snap election to try and revive his political mandate, but also to try and build on the swell of PP support at the national level following the election of Isabel Ayuso in Madrid.

In December, Mañueco broke with convention and called the snap election for Sunday 13th February, taking his coalition partners by surprise: his deputy Francisco Igea heard the news while talking up the coalition commitment while giving a radio interview. 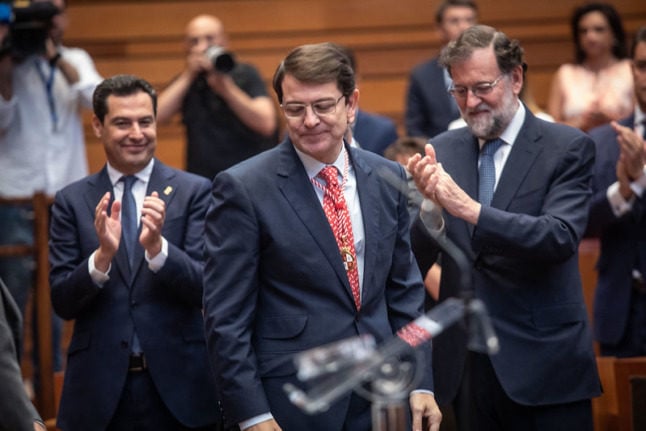 Why is it important?

Although it’s true that the Castilla y León’s coalition government had been fractured, and that the region’s PP branch is facing a corruption scandal it could do with distracting from, many in Spanish political media feel that although these specific regional level motivations do exist, in reality Mañueco’s it taking his cues from PP’s national headquarters and Sunday’s results will have a ripple effect across the country and tell us a lot about how politics at the national level could play out over the next couple of years.

PP’s regional President in Madrid, Isabel Ayuso, called a snap election Madrid last year after coalition infighting between PP and Ciudadanos down in Murcia sent shockwaves across national politics. Wanting to establish a proper political mandate, Ayuso went all in on the campaign trail – employing populist rhetoric on COVID-19 measures  – managed to win the elections outright and ousted her former coalition partners Ciudadanos. With the support of far-right Vox, Ayuso now enjoys a right-wing majority in the regional assembly and has seen a surge in personal polling numbers at the national level, leaving some in Spain wondering if she would, at some point, make a move for the national leadership.

With reports of tension and infighting between Casado and Ayuso, the Madrid leader grew in popularity while Casado’s leadership floundered as he was often outflanked on the right on cultural issues by Santiago Abascal and Vox. Publicly, at least, Casado celebrated Ayuso’s victory, but knew deep down that the battlelines had been drawn within his own party: victory in Madrid was not his, or a reflection of PP support on a national level, but that of his potential leadership challenger; one who was growing in popularity and outpolling him on almost any measure. 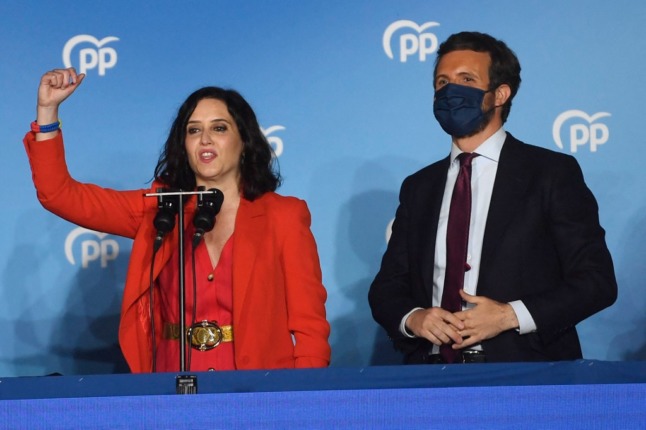 Ayuso (L), the rising star of the PP, seen delivering a speech after her victory in the Madrid regional elections in 2019, beside PP leader Pablo Casado. (Photo by PIERRE-PHILIPPE MARCOU / AFP)

Sunday’s election in Castilla y León is viewed by many as Casado’s chance to try and reestablish his leadership at the national level, and to put political space between himself and Ayuso. It’s not without risk, however. If PP fail to win an outright majority Mañueco may be forced to rely on Vox support, which damages Casado politically as Abascal and Vox supporters have been highly critical of him in recent months and would represent a serious bloody nose; if the PSOE win, as some polls suggest could happen, Casado’s leadership would be facing terminal illness and all the rumours of leadership challenges would reemerge and ‘The Iron Lady from Madrid’ will be waiting.

These regional elections in Castilla y León are also the first real political campaigning we’ve seen since the start of the COVID-19 pandemic. Ayuso won in Madrid on lockdown specific rhetoric, whereas with cases falling and restrictions being repealed, Castilla y León is the first election since the November 2019 general election in which all the big names are on the campaign trail and talking about something that isn’t COVID. For many, the regional elections will be seen as not only a referendum on Casado’s leadership, but a midterm style judgement on the Pedro Sánchez led PSOE government at the national level.

Liberal centre-right party Cuidadanos have been on somewhat of a political journey in recent years. Initially born as a social democratic alternative, the party has shifted further and further rightward and props up PP regional governments across Spain. They have haemorrhaged members and money and another poor showing in Castilla y León could be the final nail in the coffin and leave them politically and economically bankrupt. Recent polls put them at just 3 percent in national voting intention: Castilla y León could be the beginning of the end on the national level.

Far-right party Vox have long been a thorn in the side of PP leader Casado. Struggling to balance the more economically conservative sections of his support base with culturally conservative challenges from Abascal and Vox, Casado has been perceived by many on the right as being outflanked on issues such as immigration and COVID-19 measures, and has faced a series of public attacks from Abascal in the media.

With polls suggesting that Vox could swing, or at the very least play a major role in, elections in Castilla y León, an emboldened Vox presence in the regional government would not only weaken Casado’s position but provide an insight into how a general election might play out. If PP are forced to rely on Vox votes to pass legislation, the rightward trend of politics on a regional and national level seems set: if Casado attempts to alienate Vox and form electoral pacts with Ciudadanos, Abascal and Vox will surely eat into his vote share. 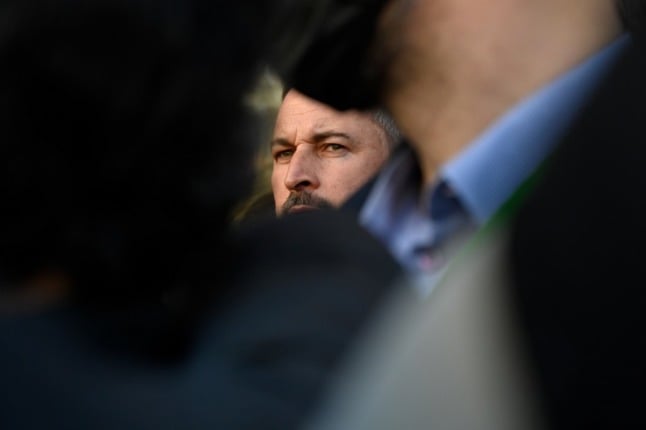 An unknown in these regional elections are La España Vaciada (Empty Spain), a political party set up to try and combat the depopulation of Spain’s rural areas. Although small and new, the ‘Empty Spain’ party could play a role in tipping the balance of power in Castilla y León’s regional governments and it is unclear who they would support.

Although relatively small, the new single-issue party is campaigning in Palencia, Salamanca, Burgos and Valladolid, and any victory could have an effect on the arithmetic in government.

Although a traditional bastion of PP politics, this election in Castilla y León is tough to call. PP were polling safely above PSOE for much of 2021, but their voting intention numbers have dropped in recent months and are now almost level with PSOE. Most polls expect Vox to improve its vote share; this would leave both major parties, PSOE and PP, without majorities: let the coalition negotiations begin. 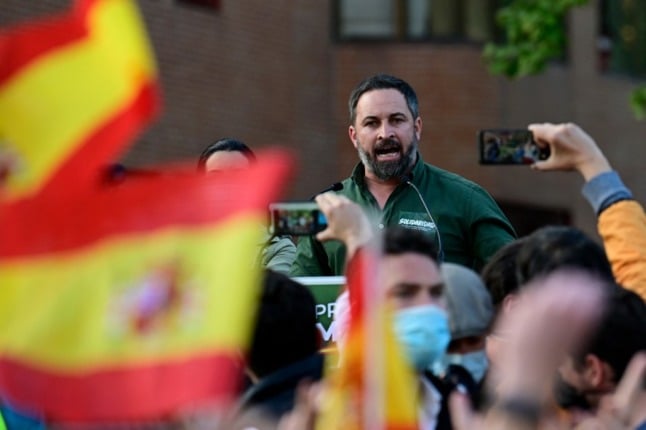 At least in the short term, “the biggest beneficiary in political terms is Vox”, which burst onto the political scene less than a decade ago, said Paloma Román, a political science expert at Madrid’s Complutense University.

PP leader Pablo Casado, who just a week ago appeared to be safe in his role, is now counting his final hours as opposition leader after raising explosive corruption allegations about the party’s most popular politician, Madrid’s regional leader Isabel Diaz Ayuso.

READ MORE: Why is Spain’s right-wing PP accusing their own leader in Madrid of corruption?

But it was a gamble he lost very publicly, and will have to step down at an extraordinary party congress whose date will be set on Tuesday during a meeting of the PP’s steering committee. 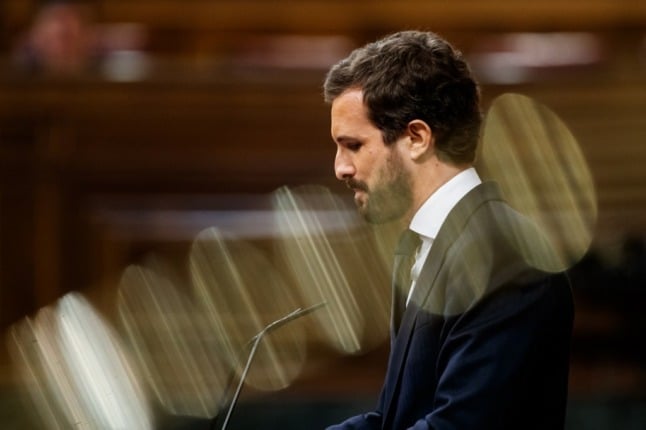 Walking a tightrope due to a loss of support within his party, Spain’s right-wing Popular Party (PP) leader Pablo Casado delivered a farewell speech on February 23rd 2022 to the Congress. Photo: DANI DUCH/POOL/AFP

At the congress, party members will chose a new leader, which is likely to be Alberto Nuñez Feijóo, a 60-year-old moderate and party stalwart who currently heads the northwestern Galicia region.

“He’s a candidate who has managed to keep Vox in check in Galicia and the leading advocate of the centrist ideology that has allowed the PP to rule Spain,” said Barrio.

Lluis Orriols, a political scientist at Madrid’s Carlos III University, said there were two factors in the current political crisis that could strengthen Vox.

Firstly, he said, surveys suggested “a large number of defections” from the PP are not people who are “likely to abstain or be undecided (in the next general election), but are turning to Vox”.

And the struggle for dominance of the Spanish right is still unresolved. 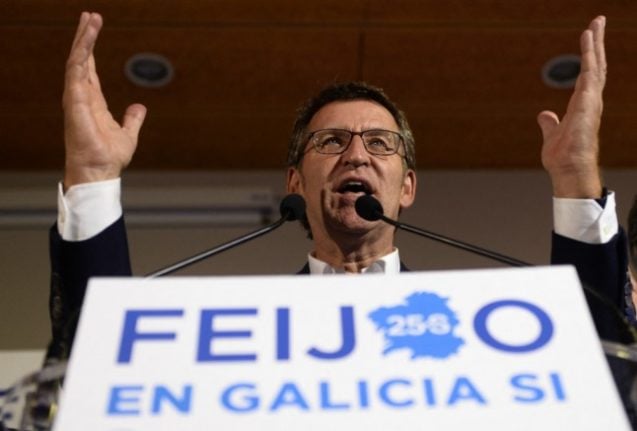 “Vox is not being restrained, unlike on the left where we see the Socialist party in control of the space which runs from the centre to the extreme left,” he said.

“In the electoral ambit of the conservative voter, Vox is clearly very competitive.”

The popularity of Vox was on show during this month’s regional election in Castilla y León, where the party won 13 seats, up from just one in the previous vote, shattering the PP’s hopes of winning an absolute majority.

The PP has time on its side

But the game is not yet over for the PP.

Despite concerns Sanchez would call early elections to make the most of his rival’s weakness, he ruled out any such move on Wednesday.

“We’re not going to bring forward the general election” on the basis of the PP’s “vulnerability”, he said.

“The rise of extreme parties reduces the incentive for early elections,” wrote Anna-Carina Hamker and Mujtaba Rahman, analysts with the Eurasia Group, in a note on the crisis.

With the next election to be held no later than early 2024, analysts said the PP had time to get its house in order — and could even emerge strengthened.

“I imagine it will fight back, it’s not going to waste the political capital it has built up over such a long period of time, being the governing party that it is,” said Roman.

“Casado’s leadership degenerated a lot and most PP voters had little or no confidence in him,” said Orriols.

However, any new leader will have to restrain the “internal pressures” that have torn the party apart and resolve the battle “between the traditional, mainstream conservatives and the free agents who tend to sympathise with the populist far-right”.

A foreigner’s guide to understanding Spanish politics in five minutes