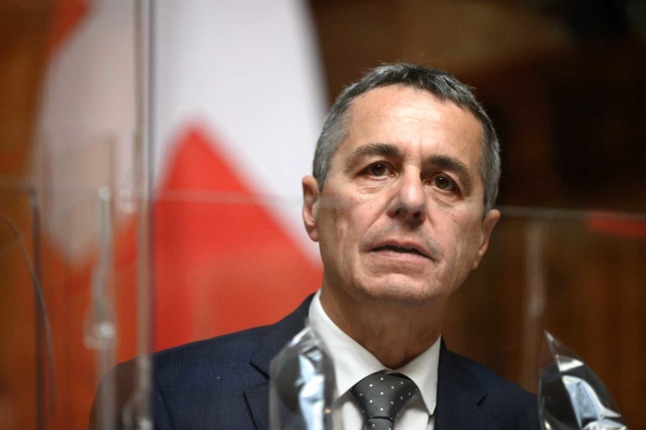 Wednesday’s “test came back positive and the president went into self-isolation this morning as soon as he learned of the test result,” a government statement said.

“Mr Cassis has no symptoms and is in good health.”

The former cantonal doctor, aged 60, who holds the annually-rotating Swiss presidency alongside his foreign affairs brief, will return to his office next week.

Cassis struck an upbeat tone on Wednesday as he announced Switzerland was joining European countries including Austria, Britain, the Netherlands, Denmark and Norway in dropping almost all of Covid-19 restrictions.

“The light is definitely there on the horizon,” he told a press conference, adding it was time to “learn to live with the virus”.

Q&A: Everything you need to know about Switzerland relaxing Covid measures

The only remaining coronavirus requirements in Switzerland are the obligation to self-isolate for five days after a positive test and to wear masks on public transport and in healthcare institutions.

To enter the country, it is no longer necessary to provide proof of vaccination, recovery or a negative test, or complete an entry form.

ANALYSIS: Switzerland ends most Covid restrictions — but what’s next?

Switzerland, population 8.6 million, has registered more than 2.6 million Covid-19 cases and over 12,500 deaths during the pandemic.

At around 20,000 a day, recorded new infections are now around half of the peak witnessed towards the end of January.

However, the case rate is still higher than in the surrounding European Union. Nearly 69 percent of Swiss residents are fully vaccinated and 41 percent have had a booster dose.

Although the European Union has approved a far-reaching economic and financial round of sanctions on Russia, Switzerland, which is not a member of the EU or NATO but maintains close ties with both, abstained from taking similar measures.

While the Federal Council announced that it condemns “in the strongest way” the entry of Russian troops into Ukraine and urges Russia “to withdraw them immediately”, Swiss president Ignazio Cassis said Switzerland will refrain from imposing its own sanctions.

“The Federal Council decided not to adopt the European Union’s sanctions against Russia, but to take all necessary measures to ensure that Switzerland would not be misused to circumvent the sanctions.”

“Switzerland may adopt compulsory measures to enforce sanctions adopted by the United Nations, the Organisation for Security and Co-operation in Europe, or Switzerland’s main trading partners in order to ensure compliance with international law, in particular respect for human rights”, it added.

The Federal Council is already evaluating the possibility of preventing Swiss banks from accepting new funds from Russia (see below).

But why is Switzerland not imposing its own sanctions on Russia?

While some critics have said Switzerland is hiding behind its neutrality, there are other reasons, according to Livia Lieu, an official at the Federal Department of Foreign Affairs (FDFA).

She said that Switzerland exercises the role of “protective power “in certain international conflicts — for example, it represents Russian interests in Georgia, and vice versa.

EXPLAINED: Why is Switzerland always neutral?

For that reason, Switzerland’s delicate role as intermediary would be in peril if the country were to act against Russia.

Meanwhile, the government’s position is inciting criticism from members of the parliament.

“The Federal Council must take a clear position. Any other attitude would mean that Switzerland tolerates open war in the heart of Europe”, said MP  Fabian Molina.

Another deputy, Jon Pult, is also critical of Switzerland’s stance.

“Putin is waging war on Ukraine against the UN charter. There is no neutrality that holds in the face of such violations of international law”, he said on Twitter. “The Federal Council’s hesitation is unacceptable”.

What Ukraine, Europe and the World need from Switzerland are SANCTIONS. At least those of the EU. The oligarchic Putin system needs to be dried up financially. #StandWithUkraine https://t.co/3OVBMWvRBk

MP Jürg Grossen is also calling for Swiss participation in EU sanctions. “I expect the Federal Council to show solidarity with its European partners and to participate in EU sanctions”, he said.

READ MORE: UPDATE: How Switzerland could be impacted by the Russian invasion of Ukraine

Switzerland has been one of the top ten investors in Russia since 2014, according to federal data cited by the RTS public broadcaster.

At the same time, according to estimates from the Swiss embassy in Moscow, Switzerland has for years been the main destination for wealthy Russians to manage their wealth.

In 2020, people residing in Russia transferred 2.5 billion dollars to Switzerland and 1.8 billion for the first two quarters of 2021. This corresponds to a five-year record, as shown by the latest economic report from the embassy.

The analysis underlines that the Swiss financial center is considered attractive for Russians, in particular because of the the political stability and neutrality.

Switzerland also plays an important role for Russia in the commodity trade. According to the report, about 80 percent of Russian commodity trade passes through Swiss financial services centers.

This explains why the largest Russian companies in the energy and raw materials sector, as well as renowned credit institutions, have a subsidiary in Switzerland.

READ MORE: OPINION: Why Switzerland is failing in its fight against money laundering