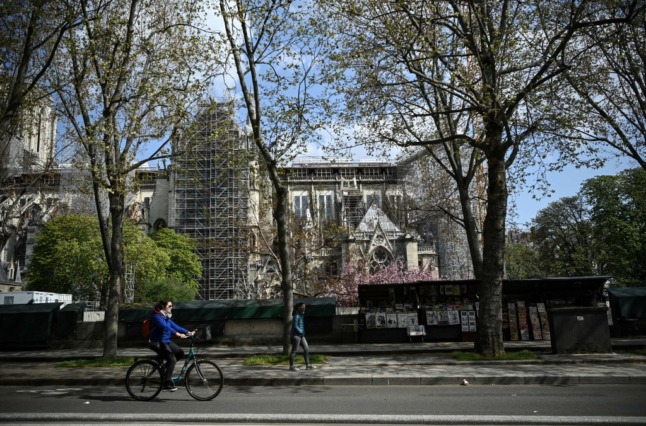 A cyclist rides her bike past Notre-Dame cathedral, which will be in the proposed 'calm zone'. Photo by Anne-Christine POUJOULAT / AFP

It was announced on Wednesday that authorities in Paris had delayed the introduction of their plan to limit vehicle use in the city centre.

Here’s how the new rules will work, and when they will be introduced.

This does not concern the whole of Paris, but only arrondissements 1-4, which make up much of the historic city centre that runs along the Seine and attracts the most tourists.

THIS JUST IN:#Paris's car-free zone announced.
Starting in 2024, cars will be banned in much of 1st-4th arrondissements.
Zone will be reserved for pedestrians, cyclists, transit, the handicapped, local residents.
Offenders will be automatically ticketed.https://t.co/3ZT542QEPc pic.twitter.com/xrQM7mu5j3

The plans were first announced in May 2021 and were set to come into effect in 2022.

However on Thursday, Paris authorities announced that the start date would be pushed back to 2024, as more preparation time was needed to implement the changes. They will also be conducting a full public enquiry throughout 2022.

The zone was also renamed the zone apaisée (calm zone).

The decision comes after the Paris Police préfecture, which has joint responsibility for the project along with City Hall, published a letter saying they did not support the immediate introduction of the plans due to concerns about access for emergency services, as well as the economic impact on the city.

An exact date for the introduction in 2024 has not been set, but Paris deputy mayor Emmanuel Grégoire said it will start at the beginning of 2024, ahead the Paris Olympics, which will be held in July and August.

The plans as envisaged by City Hall don’t constitute a complete ban on all vehicles in the city centre, and there are many exceptions.

The main target is through traffic – vehicles driving through the central zone on their way to another part of the city – which according to David Belliard, the Paris deputy mayor in charge of transportation, accounts for 50 percent of all traffic in the city centre.

There will be exemptions for people who live in the central zones to use cars, as well as allowances for delivery drivers, the disabled, taxis, VTC vehicles such as Uber, buses and car-sharing.

Also allowed in will be people whose “destination is the calm zone” – Belliard explained: “If I live there, if I work there, if I go to the cinema, to see friends, or to a shop… All this will be allowed.”

The zone will be enforced by both police checks at the entry and exit of the zone and also by more technical means such as number-plate recognition cameras for residents, although City Hall concedes that much will depend on “self regulation” of people following the rules.

Even with all the above exemptions, City Hall estimate that their plans will cut around 250,000 journeys a day.

Do Parisians support it?

Some do, some don’t. According to City Hall, 78 percent of people who answered their online and paper surveys (around 7,500 people) support the concept of limiting city-centre traffic.

But the project has also drawn vociferous criticism from many, who claim it will simply push traffic out to the less central arrondissements – which are less wealthy and attract fewer tourists – in effect simply moving the problem. The mayors of the 5th, 6th and 7th arrondissements, which lie just outside the zone, are opposed to it.

Opponents also claim it will unfairly target commuters from the outer suburbs, where public transport is often poor.

The scheme is part of a long-running effort from Paris authorities to make the city centre less polluted and more car and pedestrian friendly which has included pedestrianising the Quais along the Seine, barring traffic on certain roads such as the Rue de Rivoli and adding extra cycle lanes throughout the city centre.

In addition to the city-centre ban, Paris authorities are also phasing in restrictions on older and more polluting vehicles, based on the Crit-Air sticker system.