Novavax vaccine vials. When will the vaccine be approved in Austria? Photo: JUSTIN TALLIS / AFP

Vaccinations against Covid-19 with the Novavax jab could be possible as early as next week, according to Austria’s Ministry of Health.

Currently, more than 31,300 Austrians have registered for a vaccination with Novavax.

It is hoped some people who currently refuse to be vaccinated may be persuaded to with the new vaccine, which is a protein subunit vaccine, using different technology to the mRNA and vector vaccines previously approved in the EU.

The process used to produce Novavax is therefore closer to traditional vaccines, which may encourage those sceptical of mRNA or Vector technology.

What is an inactivated vaccine?

The Novavax vaccine is the first ‘inactivated vaccine’ to be given EU approval.

Inactivated vaccines are known in German under the scary Totimpfstoff (dead vaccine) moniker.

Inactivated vaccines are the best known examples of vaccines and have been administered for centuries.

Inactivated vaccines use dead particles of a disease or pathogen.

When administered, the recipient will generate antibodies to the disease but will not contract it, due to the fact the particles are dead.

Why is this important?

The four vaccines administered in Austria since the start of the pandemic – Moderna, Pfizer/Biontech, AstraZeneca and Johnson and Johnson – all use different technology.

Both Moderna and Pfizer/Biontech use mRNA technology, while Johnson and Johnson and the Oxford-AstraZeneca vaccine use vector technology.

While both of these technologies have been shown to be safe, authorities believe some vaccine holdouts have indicated a reluctance to embrace newer technologies and would prefer to receive a Covid vaccine using technology which they are familiar with.

A survey in neighbouring Germany showed that 56 percent of unvaccinated people would be more willing to vaccinate with an inactivated vaccine, should one become available.

The Novavax jab can also be stored at usual refrigerator temperatures, meaning that it is more portable for rural areas and for countries with poorer vaccine infrastructure.

Is the vaccine effective?

Studies show the vaccine had an effectiveness rate of 90 percent against symptomatic infections and produced only mild side effects.

Carsten Watzl, Secretary General of the German Society for Immunology noted however that as with all vaccine types, there are some doubts as to its effectiveness against the Omicron variant.

Another vaccine using similar technology, CoronaVac, was shown to have lower effectiveness against Omicron in trials in Hong Kong.

Novavax have said they would alter the vaccine to have a greater effectiveness against Omicron from January.

As with the other Covid vaccines besides Johnson and Johnson, two doses of Novavax are necessary to achieve full protection. 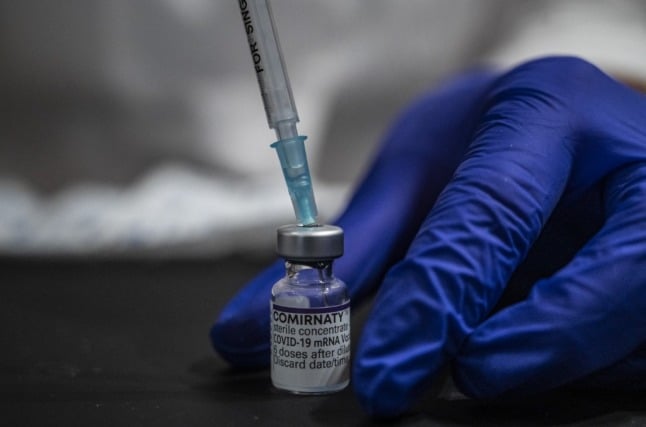 In total, 78 percent of the Austrian population have some form of protection against the virus because 14 percent have had a confirmed Covid infection, most of whom were not vaccinated.

Vaccination rates are higher among people born in Austria, at 70.4 percent, than those born outside Austria, at 64.4 percent (although it’s worth noting that Austria does not currently recognise some vaccines used in other countries, including notably the Sputnik vaccine used widely in Russia and neighbouring Hungary for example).

But there are also significant differences among international residents depending on country of origin.

Again, the use of different vaccinations in these countries likely plays a role as several foreign residents travelled to their home countries to get the Covid vaccine. Statistics Austria also notes: “The proportion of children and young people among non-Austrian nationals is higher than among people born abroad” and that children have a lower vaccination rate.

EXPLAINED: How to claim your 100 euro vaccination bonus in Austria

People working in international organisations (such as embassies or the UN) had the highest vaccination rate at 84.6 percent, followed by those working in information and communication (83.4 percent), public administration (82.1 percent) and finance or insurance (81.8 percent). The professions with the lowest rate of vaccination were construction (67.6 percent), agriculture and forestry (69.6 percent) and working in private households (69.7 percent).

And the statistics showed that 42 percent of children aged 10 to 14 had received the Covid-19 vaccine, along with 18.4 percent of those aged five to nine. Around 20 percent of children in these age groups had been infected with Covid and not vaccinated, likely leaving them with some level of protection against the virus.

At the start of the month Austria became the first EU country to introduce a law making vaccination against Covid-19 mandatory. However, it has not yet started issuing fines or carrying out checks on vaccine status, and it looks increasingly unlikely that this will happen as the country plans to remove most Covid measures from March 5th.