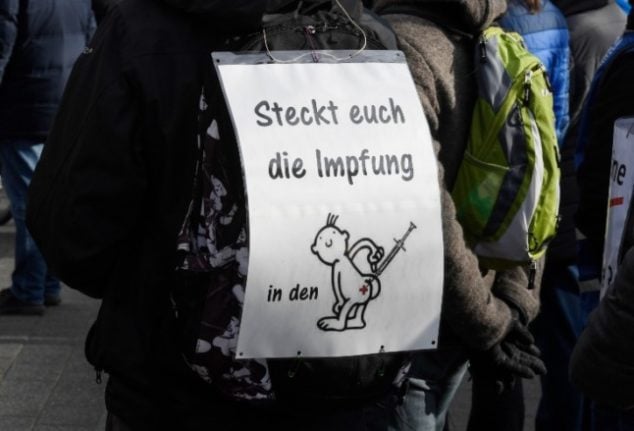 A sign reads 'stick you vaccine in the..' at a protest against vaccine mandates in Düsseldorf on Saturday. Photo: dpa | Roberto Pfeil

Germany’s controversial plan to bring in a general vaccine mandate for all adults received a further blow over the weekend after the Justice Minister said it was “doubtful” that such a measure would be accepted by the Constitutional Court.

“In my eyes, only serious public interests, like protecting the public health system against collapse, can justify such an intervention,” said Justice Minister Marco Buschmann, who is a member of the Free Democrats (FDP) on Sunday.

“Whether that is still an imminent danger at present is open to doubt,” he added.

Buschmann also questioned whether a vaccine mandate for all adults was necessary in order to protect the healthcare system.

“Do we need a mandatory age of 18 for this? Wouldn’t mandates above the age of 50 be just as effective?” he told Der Spiegel.

The opposition Christian Democrats have previously suggested mandatory vaccination should be restricted to people over 50, as is the case in Italy, for example.

Meanwhile, FDP deputy leader Wolfgang Kubicki, a long-time critic of a general vaccine mandate, told broadcaster ARD that “the planned vaccine mandate for everyone over 18 is dead.”

Olaf Scholz’s Social Democrats, who have already drafted a bill for a vaccine mandate for all adults, reacted angrily to Buschmann’s comments.

“Our draft law is constitutional,” stated SPD faction deputy, Dirk Wiese. “We have talked it over with a large number of legal experts.”

“It should be clear to our colleague Mr. Buschmann that we will only be able to prevent restrictions next autumn if we increase the vaccination rate.”

About 75 percent of people in Germany are fully vaccinated and 56 percent have had a booster.

With a general vaccine mandate such a sensitive issue, Chancellor Olaf Scholz has pledged a free vote among members of the Bundestag on any bill.

It is still unclear whether there is a majority in the Bundestag for any one bill.

Meanwhile, unusually, the government will not present its own bill to the Bundestag. Instead, various bills are being worked upon within and across all parties.

The proposal has already been hit by several delays. The first reading of a government bill was originally supposed to take place in January, but was then pushed back to early February. It has still not taken place.

But opponents have made their voices heard through regular demonstrations. Over the weekend, thousands of people joined demonstrations in cities including Düsseldorf, Freiburg, and Frankfurt against the mandates.

SEE ALSO: What would a general vaccine mandate mean for the German job market?

A “general” vaccination requirement or obligation that applies to everyone, not just specific age groups or professions – (die) Allgemeine Impfpflicht 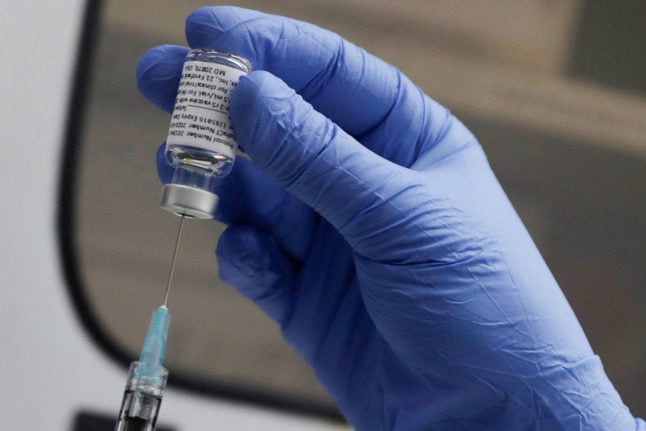 “Nuvaxovid” – the name of the new Covid vaccine from the company Novavax – is due to arrive in Germany on Thursday.

On Friday, the vaccine will be distributed to the states and it is expected that vaccinations with the new substance will be able to begin as soon as next week, though exact timing will be left up to the states to decide.

The first delivery will contain 1.4 million doses and, according to the Federal Ministry of Health, Germany will receive a total of about four million doses of Novavax in the first quarter of the year, with a further 30 million doses following between April and June.

It’s hoped that Novavax could offer a more attractive alternative for previously unvaccinated people who have reservations about the mRNA and vector vaccines. Nuvaxovid is a so-called protein vaccine which contains coronavirus-like particles which stimulate the immune system to produce defence antibodies and T-cells against SARS-CoV-2 and is therefore a more “classical” type of inoculation.

As with mRNA vaccines, two doses are needed, and the side effects are expected to be similar, though the two doses can be taken within just three weeks of each other.