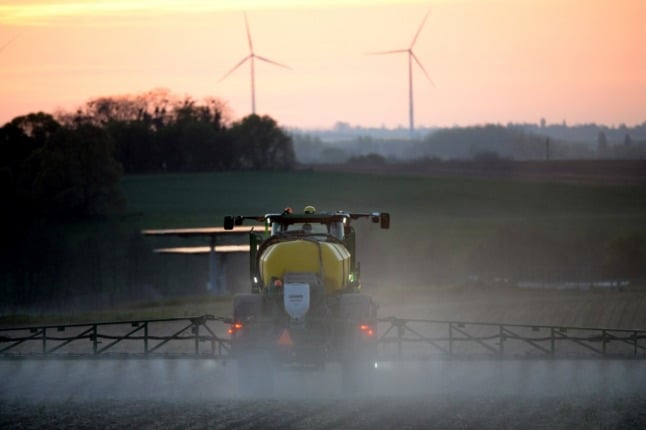 A French farmer sprays herbicide as wind turbines mark the skyline. We take a look at Macron's record on the environment and proposals from his rivals. (Photo by JEAN-FRANCOIS MONIER / AFP)

When asked, French voters say that the environment is important to them – the 2021 Fractures Françaises survey found that it was the second most important concern for French people, after the the Covid-19 pandemic.

In total 82 percent of those polled agreed that the government had to take urgent measures to address the environmental crisis even if this meant a drastic change to the French way of life. More recent polls have ranked the cost of living as the number 1 issue, but voters still say they care about the environment more than about immigration or crime.

“It is a subject that is more and more important for French people,” said Simon Persico, a political scientists at Sciences Po Grenoble. “More and more people are aware of the gravity of the crisis.”

Loan Hunyh, a 28-year-old office manager based in Paris, intends to cast her vote for the first time this year but is still undecided on her favourite candidate.

“Social questions are the main thing for me and environmental ones are second. I would place environmental policies as having a 65-70 percent importance in my decision making,” she said.

Environment in the election campaign

So if you want to vote for a candidate who will prioritise the environment, what are your options?

Albin Wagener, a researcher at Rennes University and author of Écoarchy, says that so far, the environment has not been a prominent issue among the election debates.

He believes that this is partly because president Emmanuel Macron’s main rivals are on the right of the political spectrum.

“It is mostly on the left that environmental policies are proposed. The climate emergency is not an important issue for the right,” he said.

“This election is being fought in a very narrow ideological window.”

What do the candidates offer?

Macron’s environmental track record is the easiest to examine since he has, after all, been running France for the past five years.

Unsurprisingly, his people claim that his record is great.

The Elysée website claims: “In France and on the international stage, the cause of ecology is one of the priorities of the President of the Republic.”

Acts such as the abandonment of a plan to build an airport at Notre-Dame des Landes the gradual phasing out of and single-use plastics were hailed by the government as major successes.

About a third of the €100 billion allocated under the country’s Covid recovery plan has been earmarked for ‘ecological transition’ – including the development of six more nuclear reactors. In total, the government has passed more than 50 environmental laws since 2017. 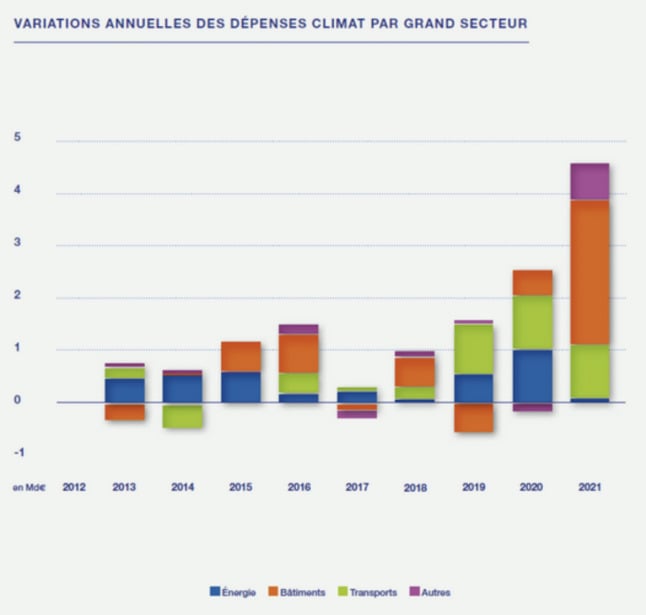 Marine Braud, a former advisor to the French environment minister who resigned in July 2021, wrote an exhaustive 48-page report assessing the environmental policy of Macron’s presidency.

“This presidency has been the one that has done the most on the environment,” she argued.

But a landmark attempt to introduce a carbon tax on fuel in 2018 was eventually dropped after triggering one of the largest protest movements in France’s recent history –  the Gilets Jaunes.

In response to the protestors, whose name translates in English as Yellow Vests, Macron launched an unprecedented democratic experiment in the form of the Convention Citoyenne pour le Climat.

A representative sample of 150 French citizens were asked to come up with a series of proposals to reduce the country’s greenhouse gas emissions by 40 percent by 2030.

Following these consultations, the government passed 146 of these propositions via the Law for Climate and Resilience in 2021. Among them:

On the international stage, France was instrumental in pushing the European Union to set a target for carbon neutrality by 2050.

Has this been enough?

Others are less convinced by the idea of Macron as a green leader.

Greenpeace France has described Macron’s environmental record as a “catastrophe”.

“The climate situation is worse now than before Emmanuel Macron took over,” said Clément Sénéchal, a spokesperson for the group. “The post-Covid recovery plan has siphoned off billions of euros to polluting sectors like the automobile sector and aviation.”

Since Macron took office, the French government has been condemned twice in court for failing to take sufficient action on climate change.

Most recently, in October 2021, a Paris court found the French state to be responsible for ecological damage and ordered the government to take immediate action to “repair shortcomings”.

Annual emissions have fallen under Emmanuel Macron, France remains the second biggest emitter in the EU and cuts have occurred at a slower rate than the EU average since 1990.

For France to reach its own target of reducing emissions by 40 percent by 2030, “the current rate [of cuts] needs to practically double”, according to a High Council for Climate report, written in 2021. 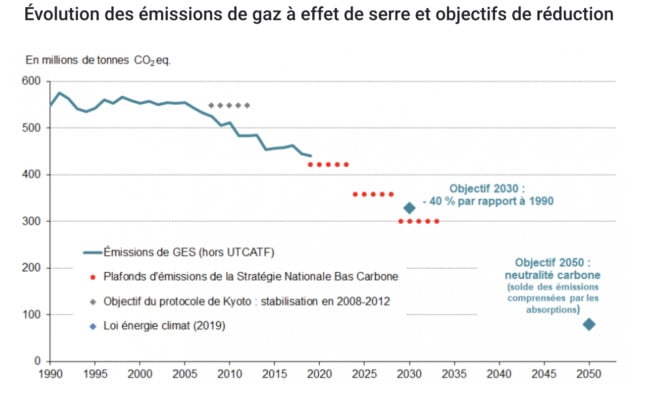 A graph illustrates the evolution France’s overall greenhouse gas emissions, excluding land-use changes. The rate of reductions needs to double for the country to achieve its climate goals. (Source: ree.developpement-durable.gouv.fr)

The slow pace of emissions reductions under Macron presidency is in part due to the state’s continued support for the fossil fuel industry and other polluting sectors. The Network for Climate Action has calculated that the current government subsidies and tax breaks towards polluting industries will amount to some €25 billion in 2022.

Critics of Macron’s environmental policy also point to the fact that he has not delivered on his promise to shut down all of France’s coal-fired power plants and for reneging on a promise to ban the use of certain pesticides such as glyphosate. Campaigners bemoan the heavy-handed policing of climate activists, as typified by the response to the 2019 Extinction Rebellion movement in Paris, during which peaceful protestors were pepper sprayed.

What about the other candidates?

Despite polls that indicate the importance of environmental issues to French voters, the subject has not been at the forefront of the public debate in the lead up to the 2022 contest, with many candidates barely mentioning it.

Marine Le Pen, leader of far-right Rassemblement National party who is currently among the highest polling of Macron’s rivals, is in favour of continuing the roll-out of better insulation in houses but is a fervent opponent of wind turbines – which she has vowed to dismantle if elected.

“Migrants are like wind turbines, everyone agrees with them being there but no one wants them next to their home,” she quipped in 2019.

Éric Zemmour, a far-right TV pundit, is also a critic of wind turbines but otherwise has suggested establishing a national reforestation plan, putting in place a carbon tax for products imported into the EU (the EU plans to implement a lite-version of this by 2023 anyway) and further investing in insulation.

All of these figures have spoken in favour further developing France’s nuclear energy sector.

This would partly explain why Macron decided to announce the launch of a massive nuclear power plant programme with just three months to go until the election.

“For the current government and for the right, the climate emergency is not about reducing consumption but a question of energy. The objective is to find ways of consuming more but with cleaner technology,” said Wagener.

Left-wing opponents to Macron, none of whom are polling above 11 percent, have been more detailed in their proposals to tackle climate change.

The most detailed environmental policies from any candidate in the race unsurprisingly come from Green party candidate Yannick Jadot.

He wants to inscribe climate protection into the constitution; ban battery farming; impose a wealth tax whereby the super-rich would have to pay a certain amount based on their carbon footprint; further develop renewable energy sources to provide 100 percent of France’s electricity supply; phase out nuclear energy and ban hunting on the weekends and school holidays.

The Greens made significant gains during the 2020 municipal elections taking control of city councils in Lyon, Strasbourg, Bordeaux and elsewhere, but it looks doubtful whether they can repeat that success in the presidential elections.

“The difficulty is to show people the importance of the climate as a central issue. The second thing is to show that you can master other subjects too,” said Sénéchal, who think Jadot could struggle in the presidential race.

Other left-wing figures running for the presidency, Jean-Luc Mélenchon (of the far-left France Insoumise) and Anne Hidalgo (centre-left Parti Socialiste), have broadly similar policy proposals on climate but have spent years cultivating and developing policies in other areas too. Neither of them support restrictions on hunting.