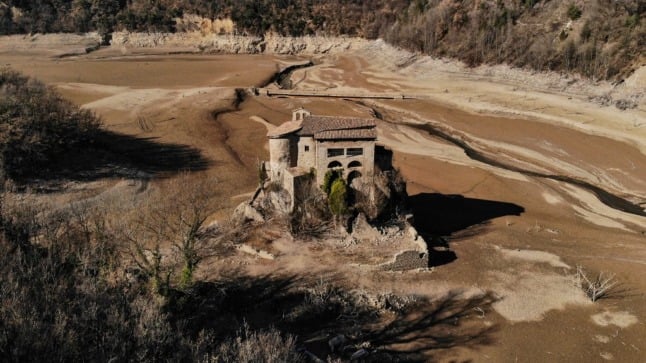 This photograph taken on February 10, 2022 shows an aerial view of the monastery of San Salvador de la Vedella, now accessible by foot due to the low water level whereas in recent years the only access was by boat, in Cercs, Catalonia. Photo by Aitor De ITURRIA / AFP

Spain and Portugal are being hit with extreme drought this winter due to the lack of rain in January, which was the second driest January since 2000 on the Iberian Peninsula, according to the meteorological agencies of the two countries.

The coming months will be crucial when it comes to establishing the drought’s medium and long-term evolution. “If the rain situation does not change radically in March and April, all the hydrographic basins will be hit by drought, and water restrictions will have to begin to be applied to irrigation,” Olcina told Información.

He also said national and regional governments are not doing enough to highlight the importance of the situation. They “must change the narrative around water and explain it to citizens,” he said. “It must be planned from the sustainable management of demand, and not from the continued idea of supply, which has been the traditional paradigm developed in our country.”

“We have to be aware that new [water] transfers in Spain will no longer be possible, and that maintaining existing ones, in some cases, is going to be complicated due to climate change.”

So far 2022 is the second driest year in the past century, something that is worrying farmers across the country.

The regions in Spain that are being worst affected by the drought are the south of the Iberian Peninsula, such as the Guadalquivir river, the Mediterranean and Atlantic basins in Andalucía, the Guadiana river on the Spain-Portugal border, the Miño river and the basins of Catalonia.

Recently the old town of Aceredo in Galicia’s province of Ourense remerged from a reservoir. The village was deliberately flooded and submerged underwater in 1992, but every few years this eerie pueblo reappears when water levels are low.

Spain’s water reservoirs are currently only at 44 percent capacity.

When asked whether we could expect restrictions in water consumption in Spain this summer, Olcina said it was unlikely except in towns that have a poorly designed drinking water management system – those that don’t have storage tanks to withstand 3 or 4 months without rain.

This occurs especially in towns in the interior of the country that depend on rainwater that reacher rivers of aquifers. Restrictions in water consumption are already being announced in parts of Andalucía and “the city of Ávila is beginning to be concerned with the situation,” Olcina said.

READ ALSO: ‘It’s not normal’ – How dozens of villages in Spain struggle for drinking water