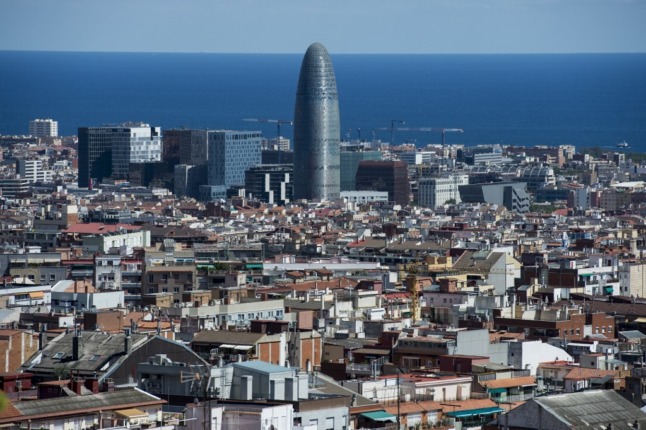 Barcelona’s terracotta rooftops have become as well-known as some of the city’s modernist buildings. In recent years, aerial photos taken with drones have highlighted the symmetry of the grid-like neighbourhood of the Eixample, as well as the earthy colour of the city’s buildings.

But the the way Barcelona looks from the sky could change in the near future in order to make the city more resistant to heatwaves.

Climate change researchers at the Universitat Autònoma de Barcelona (UAB) are leading a project to paint the city’s rooftops white to reduce temperatures.

A combination of painting rooftops and increasing green areas in the city from 32.5 per cent to 35.9 per cent could reduce temperatures by up to 4.7 degrees Celsius during heatwaves.

Urban building materials like concrete and brick store solar radiation throughout the day and release it slowly at night. White paint would reflect the sunlight and stop it from being absorbed by the buildings.

“In our study, we have detected an average reduction in temperature of 0.8 degrees during heatwaves, and peaks of up to four degrees lower at certain locations and during certain hours of the day,” Sergi Ventura, a meteorologist from UAB, told Euronews.

“We are collaborating with public entities such as [Barcelona’s] Urban Master Plan. They are in favour of painting roofs white. But so far nothing is being done. This is a low-cost strategy. And According to our predictions, in a city like Barcelona it would work even better than increasing green spaces,” he said.

With heatwaves becoming increasingly frequent and severe due to climate change, cities around the world are finding ways to combat the heat island effect.

The Barcelona city council also announced it will build 21 “green hubs” in the Eixample neighbourhood by 2030, as part of its  “Superbock” plans.

#Barcelona, facing big air pollution problems, has fallen so much in love with car-free "Superblocks" that it is significantly expanding the program https://t.co/rex5uKA9MD https://t.co/f5D2KQ1zVo pic.twitter.com/qtHsCs5PcT

In 2020, Barcelona had its hottest year for more than 200 years with an average temperature of 16.8C.

Spain also marked its hottest year on record in 2020, with an average temperatures hitting 14.8 degrees celsius – around 1.7 degrees hotter than the average in pre-industrial times.