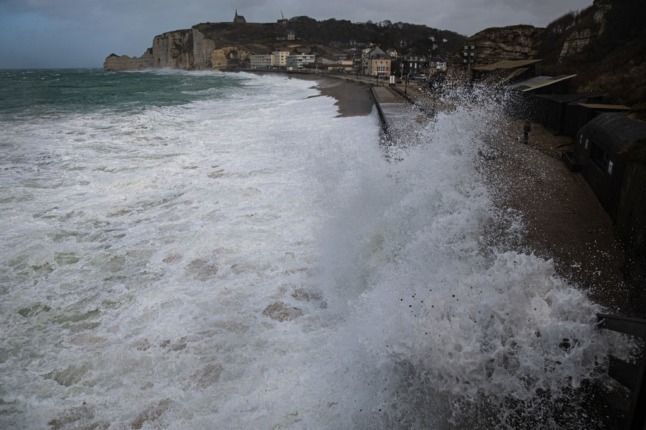 Interior Minister Gérald Darmanin announced: “At the request of the President and in order to express national solidarity with the victims of storms Eunice and Franklin, we are committing funds from the fonds de secours d’extrême urgence to the areas affected, on a one-off basis.”

This fund is “intended for individuals and families placed in a situation of great difficulty”, the release specified, and “will allow people in need following the passage of storms to obtain basic necessities, in addition to the assistance provided by local authorities”.

The départements of Nord, Pas-de-Calais, Somme, Seine-Maritime and Manche were in the path of both devastating storms, which passed within 48 hours of each other.

Storm Eunice seriously injured at least six people, crippled transport and caused damage to numerous buildings, including schools, while a couple in their seventies were washed away by waves when Storm Franklin lashed the north of the country.

A state of catastrophe naturelle has already been declared, as is required in order to unlock the emergency relief fund, and further aid may be mobilised “depending on the nature of the damage observed and the phenomena that caused them”, Darminin added.

The formal designation of catastrophe naturelle also means that people affected can benefit from an accelerated process when making insurance claims.

READ ALSO What does it mean when France declares a catastrophe naturelle?

French prosecutors said on Tuesday that they had charged a 17-year-old girl with involuntary manslaughter over the death of a hiker during a hunt for wild boar, a tragedy that sparked fresh calls for tougher rules over a cherished pastime.

The teenager presented herself to authorities on Saturday after the victim, a 25-year-old woman who was walking with a friend along a marked trail near Aurillac in central France, died after being hit by a stray bullet.

After being initially treated for shock, the teen was taken into custody for questioning on Sunday before being released, as investigators questioned others in the hunting group to determine if she was indeed the one who took the fatal shot.

While France’s love of its rural heritage runs deep, the tragedy pushed a debate over the divisive tradition into the ongoing presidential campaign, with several rivals of President Emmanuel Macron demanding greater oversight.

Several politicians have called for prohibiting hunting on weekends or during school vacations, as several other European countries have done for years.

READ MORE Where do the French presidential candidates stand on hunting?

Macron will likely face questions over the case at his scheduled appearance at the Paris Agriculture Show on Saturday, a key stop for candidates looking to court the rural vote.

“It’s a tragedy that forces us to ask questions,” Macron’s Environment Minister Barbara Pompili said on Monday, adding that it was legitimate to ask “how a girl so young can find herself with a weapon in her hands.”

Asked about implementing hunt-free days in national forests and other areas, she said: “We have to think about how to reconcile hunters with everyone else who enjoys nature.”

France is one of the few European countries that do not prohibit hunting on certain days during the season, instead allowing hunters to shoot at all times as long as they alert others of their activity — a requirement decried by critics as insufficient.

A petition last autumn seeking to outlaw hunting on Sundays and Wednesdays, when many schools do not have class, garnered 120,000 signatures and prompted the Senate to create a panel to assess its safety.

According to French daily Le Monde, citing France’s biodiversity office, there have been 3,325 hunting accidents in France since 2000, resulting in 421 deaths.

WEATHER
‘We don’t have much time to waste’: How will climate change affect Sweden?
Url copied to clipboard!