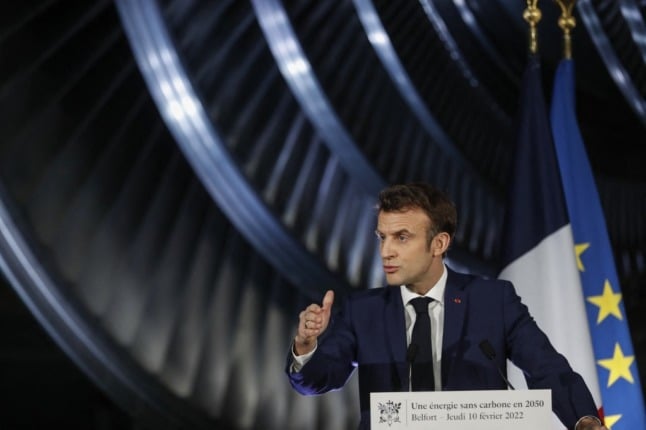 Almost unnoticed in these worrying times, France has had some good news.

France, on the whole, prefers bad news. If the country’s economic figures had just taken a turn for the worse the 24-hour news channels would have been groaningly full of them – Ukraine or no Ukraine.

The official unemployment rate in France, despite the worst health crisis for a century, fell to 7.4 percent in December, the lowest in 13 years. Youth unemployment fell to just under 16 percent, the lowest level for three decades.

France’s recovery from two years of Covid lockdowns and curfews has been exemplary. The economy grew by 7 percent in 2021, the second best performance amongst large industrial nations.

These are all excellent talking points for President Emmanuel Macron as he finally steps aside from saving the world (next week probably) and starts his campaign to hold on to the Elysée Palace.

But there are also dark, economic clouds gathering. The  confrontation with Russia over Ukraine will make them even darker before the first round of voting on April 10th.

The pump price of petrol and diesel is now 20 centimes a litre higher than it was before the Gilets Jaunes revolt started in autumn 2018. Crude oil prices will soon pass $100 a barrel.  Food prices are spiralling. Wages for the low and middling paid have not shifted much for over a year.

The wholesale price of gas (30 percent of which comes from Russia) will continue to soar but will have no immediate effect in France because the government has pegged retail prices until June.

Emmanuel Macron’s failed attempts to woo and warn Vladimir Putin will not, in themselves, cost him many votes. Perhaps none.

Several of his opponents – Marine Le Pen, Eric Zemmour, Jean-Luc Mélenchon – are deeply compromised by their previous Putin-idolatory. They accuse Macron of both freelancing and being Washington’s puppet; of doing too much but not quickly enough.

Some criticism of Macron may be justified. He was right to attempt to prevent a war. But he was too optimistic about his chances and too ready to take Vladimir Putin at his word.

I expect that none of that will do Macron much harm. The gathering cost-of-living crisis, worsened by western sanctions and the Russian response to them, should  worry him far more.

First,  however, lets first do something very unFrench and give Macron economic credit where it is due.

Almost two years ago, during the first Covid lockdown, I compared the French economy to the enchanted castle in the story of Sleeping Beauty. For how long, I asked, can you place a complex society like France into an artificial coma and expect businesses, jobs and investment to spring back into life like the people, horses and dogs in Charles Perrault’s fairy tale: “La Belle au bois dormant”?

As the final Covid restrictions are lifted (we hope) in the next few weeks, we know the answer. Emmanuel Macron and his finance minister Bruno Le Maire deserve enormous credit for their “whatever-it-costs” support for businesses and individuals in the last 23 months.

There will be an enormous bill to pay, eventually, in increased debt. But the short and long term price of a smaller or weaker safety net would have been greater. Ask the Germans

Britain, which copied some aspects of the French support programme, has higher growth than France last year but a much bigger recession in 2020. Taking the two years together, France did better.

The American economist Paul Krugman recently declared that that France was the “star” economic performer among large industrial nations in the last two years.

The latest, low unemployment figures reflect – in part – Macron’s and Le Maire’s success in putting the French economy on life support in 2020 and removing the feeding tubes skilfully in 2021.

They also reflect the success of earlier Macron reforms to ease pay-roll taxes and make hiring and firing easier. Most of all, France finally has a decent apprenticeship system which is taking hundreds of thousands of young people off the dole and starting them in worthwhile and productive trades and careers.

New rules and incentives introduced under Macron mean that apprenticeships – long a French weakness – have doubled from 318,000 a year in 2018 to 718,000 last year. All but a handful are in the private sector.

Full disclosure: some other recent economic statistics are poor. Apart from increases in public deficits and accumulated debt, the country’s trade deficit is worrying. The economic recovery last year was driven partly by consumer spending on foreign goods.

That is unlikely to influence the election. The buoyant jobs market might. It explains in part Macron’s steady 24-26 percent support and 8 to 9 point lead in Round One

The spike in petrol pump and food prices, however, could start to pull his numbers in the other direction in the next seven weeks.

France is not a high-wage country. A recent EU map showed that all parts of France except the Lyon and Paris areas are at, or below, the EU average of GDP per head. It would not take much in the way of further rises in pump and supermarket prices to build real anger in a country which is always quick to blame and slow to praise.

The fall in unemployment is to Macron’s credit. The price rises are not “Macron’s fault”.

They are, all the same, a dark cloud moving of what looks otherwise like a pretty sunny electoral outlook for the President.