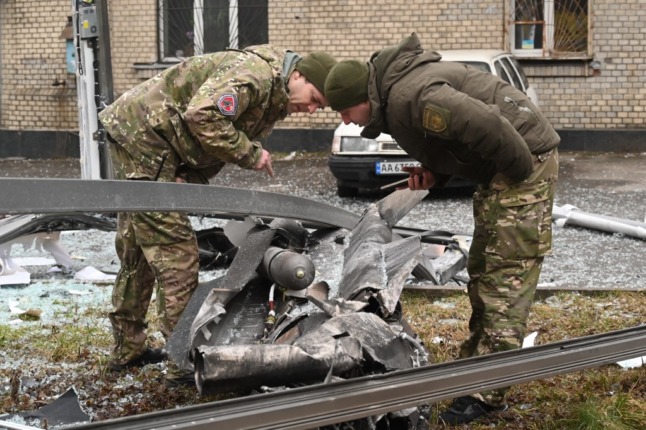 Ukrainian security personnel inspect the remains of a shell dropped in Kyiv on Thursday. (Photo by Sergei Supinsky / AFP)

French President Emmanuel Macron on Thursday strongly condemned Russia’s military action against Ukraine and vowed that Paris would work with allies to try to end the conflict.

“Russia must immediately put an end to its military operations,” Macron wrote on Twitter, saying Russia had made the decision to “wage war” on Ukraine.

“France stands in solidarity with Ukraine. It stands by Ukrainians and is working with its partners and allies to end the war,” he added.

The French President has since summoned the defence council and spoken with his Ukrainian counterpart, Volodymyr Zelensky, over the phone.

Macron had repeatedly spoken to President Vladimir Putin seeking a diplomatic solution to the standoff but to no avail.

After frenetic telephone talks at the weekend, he has not spoken to the Russian leader since Putin on Monday recognised two Ukrainian breakaway regions as independent.

Before Putin announced the “special military operation” in the early hours of Thursday, Macron spoke to Zelensky late Wednesday, emphasising the importance of Ukraine‘s sovereignty and territorial integrity, the Elysee said.

He vowed that France would continue to help Ukraine financially and economically and supply “defensive equipment,” the French presidency said in a statement.

Support for Ukraine will be on the agenda at the emergency summit in Brussels late Thursday.

The summit follows the EU’s adoption of sanctions against Russia for declaring pro-Moscow separatist regions of Ukraine to be independent and mandating military forces to go into them.

Overnight, the Kremlin said the heads of eastern Ukraine’s rebel republics had asked Russian President Vladimir Putin for “help” to “repel aggression” from the Ukrainian army.

The French government has called on all of its citizens in the country to return to France.