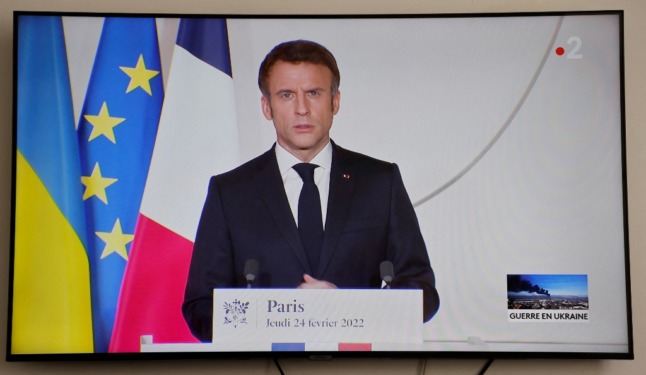 “We will respond without weakness to this act of war, with calm, determination and unity,” Macron said in an address to the nation, adding that the events were a “turning point in the history of Europe and our country” that would have “deep and lasting consequences for our lives.”

Standing in front of a Ukrainian flag alongside the usual French and EU flags, he added that the events were a “turning point in the history of Europe and our country” that would have “deep and lasting consequences for our lives”.

Decisions would be taken at meetings of the G7, EU and NATO in the next hours, he said, adding that the sanctions agreed against Russia would be “up to” the scale of the aggression Moscow had launched.

“In the military, economic and energy domains we will be without weakness,” he said.

Macron had repeatedly spoken to President Vladimir Putin seeking a diplomatic solution to the standoff but to no avail. After frenetic telephone talks at the weekend, he has not spoken to the Russian leader since Putin on Monday recognised two Ukrainian breakaway regions as independent.

Macron said that the “massive” Russian attack on Ukraine was “contrary to all the commitments made by the Russian authorities”.

“By going back on his word and refusing the diplomatic path and choosing war, President Putin not only decided to attack Ukraine, he decided to tarnish the whole sovereignty of Ukraine,” said Macron.

“He decided to inflict the most significant damage on peace and stability in Europe for decades,” Macron added.