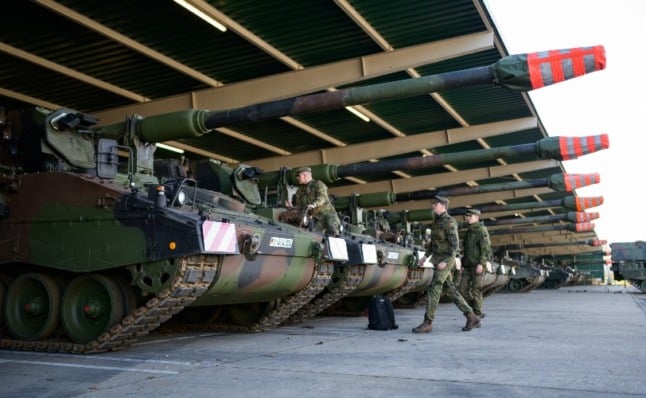 Finance Minister Christian Lindner said it was time for a “turning point” in German defence investment, long a target of criticism by Western allies.

“I worry that we have neglected the armed forces so much in the past that it can’t completely fulfil its duties,” he told public television.

“Falling defence spending no longer fits with the times.”

Former defence minister under Angela Merkel, Annegret Kramp-Karrenbauer, had earlier admitted Berlin was guilty of “historical failure” in not bolstering itself militarily.

She said Germany had forgotten lessons from the past that “negotiation always comes first, but we have to be militarily strong enough to make non-negotiation not an option for the other side”.

“I’m so angry at ourselves for our historical failure. After Georgia, Crimea, and Donbas, we have not prepared anything that would have really
deterred Putin,” said Kramp-Karrenbauer, referring to incursions carried out by Russia while Merkel was in power.

Her Twitter outburst came as the chief of the German land army, Alfons Mais, posted on the social network LinkedIn that “the options we can offer to politicians to support (NATO) are extremely limited.”

The Bundeswehr “is more or less bare,” he wrote in the stark admission.

‘Now is the time’

Western allies had “seen it coming and were not in the position to come through with our arguments, to draw the lessons from the annexation of Crimea and to implement them,” the commander said.

“NATO territory is not directly threatened yet, even if our partners in the east feel the constantly growing pressure,” he said.

Mais said it was high time to bolster the army.

“When if not now is the time to… rebuild, otherwise we will not be able to carry out our constitutional mission or our obligations to our allies with any prospect of success,” he said.

Germany’s dark past has nurtured a strong pacifist tradition, and it has often been criticised by partners for not pulling its weight in tackling
crisis hotspots.

Defence officials have over the last years repeatedly sounded the alarm over the army’s equipment woes – a litany of disrepair plaguing fighter planes, tanks, helicopters and ships.

At the end of 2017 all the country’s submarines were in drydock for repairs while for some of the following year none of the air force’s A400M transport planes were airworthy.

Russia’s invasion may well force changes in priorities, with the Bundestag’s armed forces commissioner Eva Hoegl saying the army may have to switch from focusing on foreign missions to “domestic and allied (NATO) defence”.

She too admitted the Bundeswehr’s “standing start capability is not what it should be”.

NATO partners will hold a virtual summit Friday to discuss their response to Russia.

Around 550 German soldiers are stationed in Lithuania as part of a NATO mission, with another 350 troop reinforcements already pledged. But Defence Minister Christine Lambrecht has said the numbers could be increased.

Asked about the latest criticisms within the army, Lambrecht said Germany’s “allies can count on us 100 percent”.

“I can only advise everyone who carries responsibility to put all their efforts into meeting these challenges right now. That is the order of the day,” she said.

Germany was criticised in the build-up to the invasion for refusing to deliver lethal weapons into the crisis zone, sending instead 5,000 helmets to Ukraine.

Instead, Germany has provided Ukraine with over two billion euros ($2.2 billion) in financial support over the last eight years.

In January, the head of the German navy, Kay-Achim Schoenbach, stepped down following a remark made at an Indian think-tank that the Russian President Vladimir Putin “is to be respected”.